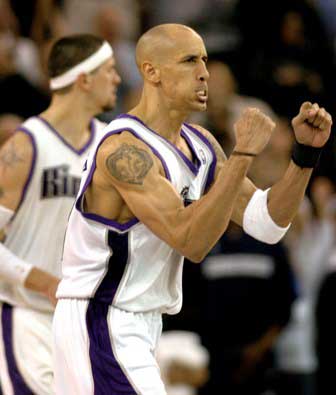 According for former NBA star Doug Christie, physical ability is only about 30-40 percent of the battle when it comes to success in professional basketball. With that in mind, he has opened Christie Sports Management (CSM) to help players realize their full potential.

“Understanding the game along with hard work leads to greater athleticism,” Doug Christie said in an interview with Regal Magazine at the tail end of 2010. “We help train players to do what it takes to see the game more clearly and play it the right way.”

The mission of CSM is to integrate mind, body and basketball while training, educating and motivating. In essence, CSM teaches athletes to cope with the trials and tribulations that come along with the specific and grueling NBA lifestyle. Clients include Matt Barnes of the Lakers and Washington’s William Ayres III.

In the training he provides, Christie discusses obstacles players will face including injuries, tryouts and moral dilemmas to bring the athlete into balance with mind, body and sport. CSM takes a proactive approach as Christie uses his own real-life experiences to form the basis of the lessons he shares. He says he strives to present positive solutions to cope with dilemmas and tribulations that athletes face.

Doug Christie was well known for putting his family first during his 14-year NBA career. This moral approach is something he teaches at CSM. He calls it the “Christie Way.”

“The game takes so much energy. Staying out all night can hurt. I ask my players to be honest with themselves and change if they’re trying to play games while they are tired,” Doug Christie said.

“When I got back to the hotel after I played a game my wife had a warm bath waiting with Epsom salts to detoxify me after games,” Christie said while also noting that was much better way to take care of himself than running around. “I always tried to eat right, study tape and stay in shape, and that is what I pass along to the athletes I train. Basketball is a beautiful game when it is played the right way.”

Christie also teaches his students time management skills to maximize all the free time that comes with a pro sports career. “I encourage my students to think about what they want to do besides basketball or after basketball and then use their downtime to learn or do other things.”

Doug Christie’s NBA career ended in 2007 during the second of two 10-day contracts with the Los Angeles Clippers. Unlike many athletes, he was able to make a clean break. “I understood that it was over,” he said.

Today, the “Christie Way” of family involvement extends to CSM. Christie’s wife Jackie helps with a lot of the coordination work behind the scenes to make sure Doug and the athletes with whom he works with can concentrate on their training. Christie’s 18-year-old daughter, Chantel helps keep her dad’s busy life by maintaining his schedule and calendar.

Currently, CSM concentrates on training for basketball players, but Christie is considering licensing his concept for other sports that rely on continuous movement such as soccer and tennis.

Doug Christie says that CSM offers players a new way of looking at life and a novel way of playing the game, studying the game and understanding the game. And as CSM grows, there will be more players adopting the “Christie Way.”