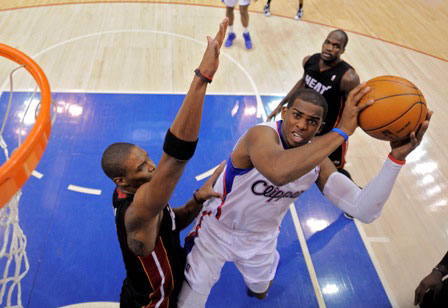 Chris Paul has the Clippers competing with the upper echelon teams like the Heat (AP Photo/Mark J. Terrill)

On Dec. 8 Chris Paul was traded by the New Orleans Hornets to the Lakers in a three way deal in which the Lakers would give up Lamar Odom and Pau Gasol.

That trade was vetoed by NBA Commissioner David Stern because of competitive balance concerns and some lobbying by NBA owners who had just gone through a lockout in which the plight of the permanently mediocre was a major focus.

It has been argued that Stern was wrong to veto a deal which had been agreed upon by adults charged with running NBA teams. Still, the veto was not overturned; the Lakers and Hornets were not able to reach a separate agreement; and Paul (who had said he would not re-sign with New Orleans) was traded to the Clippers on Dec. 12.

If the early returns are to be believed, that deal triggered a changing of the guard coveted by many. The Clippers with Paul, Blake Griffin and others have become one of the most compelling shows in the NBA and have surged ahead of the Lakers in the standings, perhaps altering the league’s power structure and the pecking order of Los Angeles basketball.

“It was a disappointing experience,” Lakers General Manager Mitch Kupchak said to ESPN Sunday night before the Lakers fell to 10-8 on the season with a loss to the Indiana Pacers. It’s the first time I’ve ever been through something like that. But we moved on and that’s where we are today.”

Where the Lakers are today is also without Odom who was traded to Dallas when the NBA’s top reserve said he could not play at a place that had wanted to send him away in the original Paul deal.

The only team allowed to wear gold at home looks relatively old and tired, has trouble winning on the road and is struggling to stay above .500. Including exhibitions, the Lakers have lost four of five to their intra-city rivals.

The Clippers on the other hand are now playing to enthusiastic sellout crowds and appear to be a lock to make the playoffs and do some damage.

They are getting highlight reel dunks from former number one pick Griffin, creative coaching from Vinnie Del Negro, and from Paul the best point guard play seen in Los Angeles since Magic Johnson “obtained” the HIV virus in 1991.

Last week the Clippers won in Utah for the first time since 2003, including a 29-point loss earlier this season. Paul scored a season high 34 points as he continues to assimilate himself with his new team while recovering from a minor injury that caused him to sit out the earlier game in Utah.

“The last time we played here, I sat here and watched how they sort of embarrassed us,” said Paul to the Los Angeles Times. He was 15 for 24 from the field this time. “You hear the crowd. Somebody like me, I couldn’t wait to get here for this next game. I think it showed some growth of our team in being able to come back when we got down and to fight through. This was a good win for us.”

With the team now assembled for what always has been the second tenant at the Staples Center, groundbreaking wins should become commonplace. A trip to the Western Conference Finals is not out of the question, and once a team gets that far anything can happen. It is indeed a new day for Los Angeles basketball.