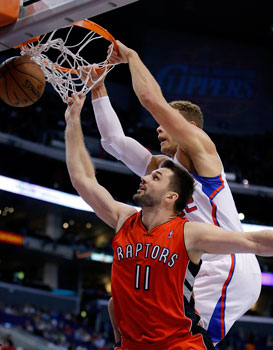 Strengths: The Clippers led the NBA in scoring averaging 107.9 points per game. They were also second in the league in point differential (+6.9) and they are excellent at moving the ball (third in the NBA in assists at 24.6) as well as protecting the ball (13.3 turnovers per game, 6th fewest in the NBA). The athleticism in Los Angeles is huge meaning they present difficult matchups at every position. The Clippers also posses the league’s best players at point guard in Chris Paul and power forward Blake Griffin.

Weaknesses: The Clippers could improve their rebounding as they averaged 43 rebounds per game as a team last season (14th in the NBA) and -7 rebounding differential (20th in the NBA). Surprising since center DeAndre Jordan averaged 13.6 rebounds per game last season, but he needs help on the glass with some of the frontline issues the Clippers have. Injuries were an issue last season as Chris Paul, J.J. Reddick, Jamal Crawford and Matt Barnes all missed significant time.

Outlook: The Los Angeles Clippers have one of the most talented teams in the NBA and they seem to have all the pieces in place to hoist the championship trophy, but they have yet to advance past the second round. True, they play in a loaded Western Conference, but could this be the year they get over the hump…. possibly get to the Western Conference Finals???? They will need to bring their best game with Oklahoma City and San Antonio still teams to beat in the West.

Playoff result: Lost to Los Angeles Clippers in the Western Conference first round.

Strengths: Golden State is starting to get their due on the defensive end only giving up 99.9 points per 100 possessions. The Warriors have the best defensive talent at small forward, shooting guard and center. Draymond Green is one of the few players in the league that can guard at all five positions. Harrison Barnes is a solid defender who should continue to improve in his third season. Shaun Livingston will add more offense from the guard position. If they continue to improve their conditioning and execution of the defense scheme, Golden State is one of a few teams who can pace the league in defense.

Weaknesses: For a team who claims to have the best backcourt tandem in the NBA, Golden State finishing 12th in the league in offense seems a little disappointing. Mark Jackson, who as a player instituted the rarely called five-second backdown rule, was much critized for his stagnant isolation-heavy coaching style and desire to attack mismatches, which led to his departure as head coach. New head coach Steve Kerr has stated a desire to get Stephen Curry the ball in more situations other than high pick and roll. While this may be desirable to save some wear and tear on Curry, it was the Warriors most effective play last season.

Outlook: New head coach Steve Kerr will have a challenge ahead of him and the challenge will be how much his impact will improve the Warriors defense. Kerr’s impact will be felt on offense also as Golden State finished 12th in the league offensively. We will find out this season if the Warriors offense struggled because of Jackson or if they were overrated. Aside from the impact of the coaching change, a key question is whether expected improvements from the younger guys of Curry, Thompson, Barnes and Green can exceed the declines and/or injuries to the older guys (Iguodala, Lee and Bogut). With positive answers to those questions, the Warriors are a dark horse contender in the West.

Strengths: Even though no one is going to mistake the Lakers roster currently constituted as any type of contender, they have clearly improved at several positions and if healthy, they should be able to score and produce offensively as every one settles into and learns Byron Scott’s offensive philosophy. If Scott stays true to form, you should see a running mixture of pick-and-roll with various elements of the ole Princeton offense. Of course getting Kobe Bryant back healthy and for a full season should make things more interesting in Los Angeles.

Weaknesses: Not to continue to harp on it because the Western Conference is more about offense than the Eastern Conference, but neither Jordan Hill or Ed Davis have ever played in a starting capacity at center and now you add rookie Julius Randle out of Kentucky into the equation, it will interesting to see how the coaching staff will break down the minutes with a logjam of frontline players. Already the Lakers will lose Nick Young for the first part of the season with a thumb injury, so look for Jordan Clarkson to see some time at the shooting guard if things progress well enough for the first-year player.

Outlook: The Lakers will be competitive and will be better with Kobe Bryant returning healthy. Head Coach Bryon Scott returns to coaching to a job he’s wanted since he was a player with the Lakers, and they have a roster with youthful potential that could make Los Angeles a big player in free agency a couple of years from now. Regardless of what Kobe has left in the tank, the Lakers are at least competitive or in jeopardy of having to worry about surrendering a lottery pick to a team within the division in Phoenix. We could also begin to see the beginning of the end as Bryant will pass Michael Jordan to be the NBA’s third all-time leading scorer.

Prediction: 44-38, 3rd in Pacific Division, does not make playoffs.

Playoffs: Did not make playoffs.

Strengths: Guards, offense and youth. Eric Bledsoe and Goran Dragic are the Suns’ best players and are the keys to everything Phoenix does on the offensive end. Getting Isaiah Thomas from Sacramento adds even more playmaking and scoring to the Suns, but coach Jeff Horancek will have to balance his three scoring point guards. In addition to the backcourt, the Suns have a ton of youthful talent like Gerald Green, who had a breakout season last season, the Morris twins, Alex Len, T.J.Warren, Miles Plumee, and rookie first-round pick in Bogdan Bogdanovic, who will develop his talent overseas in Turkey next season.

Weaknesses: Star power and experience. Phoenix will be undoubtedly a fun team to watch and can beat any opposing team on any given night. Although Eric Bledsoe and Goran Dragic are good, neither will break into the top 10 or 15 as far as being one of the best players in the league and Phoenix may not necessarily need a top flight star to win at highest level, but having an elite player on the roster may have helped lure a top free agent this past off-season. Bledsoe does have the potential to develop into an elite player, but they will be at a disadvantage to teams like San Antonio, whose main core of players have years of experience playing together in the postseason.

Outlook: Could Goran Dragic and Gerald Green duplicate last season’s breakout performances? Rookie T.J. Warren showed flashes after a strong summer league. Could Markieff Morris pickup his shooting to help the loss of Channing Frye to Orlando? Can Eric Bledsoe stay healthy all season as he continues to push for a new contract? And could head coach Jeff Hornacek continue to sell Phoenix that they can continue to be a solid defensive unit and make Alex Len into premier shot blocker? Well, it could be a barometer of how well Phoenix will compete for a playoff spot in the wild, Wild West.

Prediction: 43-39, 4th in Pacific Division, does not make playoffs.

Playoffs: Did not make playoffs.

Strengths: The Kings are built around two offensive forces in DeMarcus Cousins and Rudy Gay that will attract a lot of attention from opposing defenses. With Darren Collision and Ray McCallum both adept at creating opportunities off of the dribble and Nik Stauskas and Omri Casspi providing floor spacing, the Kings have a few of the components necessary to create a somewhat potent offense. While merely relying on scoring more points than the opposition has rarely been the recipe for sustained success in the NBA, the Kings at least have a core whose offensive talents should mesh quite well.

Weaknesses: Defense and turnovers. Although DeMarcus Cousins is one of the few NBA players to average greater than one block and one steal per game, he is not the defensive anchor that a playoff team would count on each day. As a post defender, Cousins is a bit impatient and still needs to improve on his lateral quickness. Last season, the Kings allowed 103.4 points per game, which was seventh highest in the league. They simply have not done enough to adequately address that this offseason, so a repeat performance is likely. The other major concern for this team will be turnovers. Last season, Cousins turned the ball over 3.5 times while Gay did so three times. Since these two will possess the ball most often, that is very bad news. Fortunately, Darren Collison should lessen the extent to which Cousins and Gay handle the basketball, and Collision himself turned the ball over just 2.3 times per 36 minutes last season.

Outlook: Cousins carries over his Team USA defense the last few games to the NBA season, and Malone somehow wrings enough out of everyone else to get the squad into the top-20 on that end. Somehow, the Kings are right about Collision, Stauskas provides needed shooting, McLemore becomes playable, and the Kings get a little better on offense despite losing Thomas. This team underperformed its Pythagorean record by five games last year, so even modest improvements could result in a lot more wins if they have average or better luck in close games.