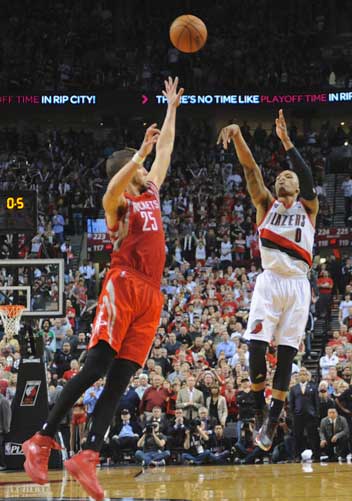 Strengths: Kevin Durant and Russell Westbrook…Durant is perhaps the best scorer and the most dominant player in the Western Conference and is the favorite to win another MVP award, but Durant has improved in other areas. Westbrook is as good as anybody at the point guard with his superior athleticism that has made him a consistent offensive threat. Add Serge Ibaka as a solid No. 3 scorer in addition to the fact that he doesn’t need a lot of touches to be effective as he led the league in blocked shots last season. Reggie Jackson is emerging as a star in this league and could be playing big minutes for other teams.

Weakness: There is a hole at the shooting guard position. They did add long-range specialist Anthony Morrow from New Orleans, or could Jackson be that guy there? Jackson has been vocal about his desire to play a bigger role, could it be this opportunity? They could use more depth especially in the frontline positions of forward and center. Kendrick Perkins, the enforcer for the Thunder, will miss some time early in training camp with a knee injury. They do have a nice prospect in Steven Adams, who saw a lot of playing time last season.

Outlook: Oklahoma City should continue to dominate the Northwest Division and more importantly is among the elite in the Western Conference. However, pressure will start to mount on the Thunder with Durant’s impending free agency in a couple years. The Thunder are one of the best transition teams in the league with Durant and Westbrook, but their basketball IQ is not up there with San Antonio yet. Pressure for this talented group to win a championship is mounting by the year. Can they get it done this year?

Playoff result: Lost to the San Antonio Spurs in six games in the Western Conference semifinals.

Strengths: Portland has a great inside-outside punch with LaMarcus Aldridge and Damian Lillard. Lillard is one of the best young point guards in the league as he can create his own shot and can hit them in the clutch as well. Aldridge has been pretty consistent at power forward, rated one of the best in the league over the last five years. They have great rebounders at every position leading the NBA in rebounding last season. Portland does a great job in taking care of the ball as well, ranking in the bottom four last year in turnover ratio even though the Blazers play at a pretty good pace compared to most teams.

Weakness: The bench is subpar at best. Sixth man Mo Williams is gone and the few reserves they do have cannot be counted upon to give the team much. They are average defensively as the Blazers gave up 102.8 points per game last season. Although he has made progress, Lillard has to put as much interest on defense as he does on offense. Plenty of the players are in contract years, which usually results in selfish play in years past with other teams. Robin Lopez’s play in the middle is key for the Blazers to keep them in the playoff conversation.

Outlook: After missing the playoffs the year before, Portland rebounded with a solid year and advanced past the first round for the first time since 2000. The Blazers starting five, which also includes Nicholas Batum at small forward, Wesley Matthews at shooting guard and Lopez at center still makes them a formidable opponent to match up with especially in the Western Conference with a lot of bigs. Portland has a solid starting unit, but with a subpar bench, can they stay with the elite teams in the West?

Strengths: Youth and athleticism; Minnesota is built for the future after trading away Kevin Love to Cleveland for the No. 1 overall pick Andrew Wiggins and former No.1 pick Anthony Bennett. Wiggins could be a future star in the league and will definitely be key in Minnesota’s growth. In addition, add point guard Ricky Rubio and the Timberwolves have one of the most exciting young cores in the league. Youth may not produce wins and playoff berths in a short period of time, but for now Minnesota will be one of the most exciting teams to watch in the league this season.

Weakness: Winning close games; Minnesota struggled to close out games last season and that was with Kevin Love on the roster. Without him now, veterans like Kevin Martin and Mo Williams will have to hit those shots in the clutch like they have done in their careers. Filp Saunders doesn’t have Kevin Garnett like he did earlier in his career this time around in Minnesota, and with execution late in games being a key with so many young players on the roster the Timberwolves will struggle again this season closing out games late.

Outlook: This is a team with a lot of variability given how much they will have to rely on young players this season. Many of them like Zach LaVine and Andrew Wiggins are unlikely to be winning contributors in their first years. But there is a slight chance they might. Best-case scenario, Minnesota actually sneaks into the playoffs at bottom of the Western Conference playoff picture. If Saunders can get the Wolves defense in the top 10 without much drop off on offense after the departure of Love, Minnesota could be right around the .500 mark as they make progress with a young team.

Strengths: Heading into this season, it’s the second unit off the bench for Denver that’s easily the strength of team. The Nuggets have 10 players on their roster that could easily start for other teams and ultimately head coach Brian Shaw will have to find minutes for each of those guys. Denver does get Danilo Gallinari back after undergoing two knee surgeries over the past 18 months. At 6’10, Gallinari can play the small forward spot with the best of them and can shoot the 3-ball with consistentency at 37 percent for his career. Kenneth Faried, coming off his performance in the World Cup, is easily Denver’s best player averaging 18.1 points and 10.4 rebounds per game after the All-Star break last season.

Weakness: Denver’s defense will be an ongoing issue throughout the season. The Nuggets had the third-worst defense last season giving up 106.5 points per game. Should Denver be able to fix their defensive woes, they could find themselves in the thick of the Western Conference playoff picture. The rock solid starting five can get it done offensively, but if they cannot get it done on the defensive end, Denver could be in trouble.

Outlook: The Nuggets first mistake was letting George Karl walk two seasons ago after winning Coach of the Year and winning 56 games. They brought in Brian Shaw and are still trying to find their identity. A lot of the players returning are a shell of themselves and Shaw will have to find the best combination to get on the floor to be successful. In the Western Conference there are 12 teams legitimately that can compete for the playoffs and the Nuggets chances surely will be determined by how their players coming back from injury perform. With those players coming back and playing like they did in the past, Denver should be competitive for the season and the bench could prove to be huge in March and April.

Playoff result: Did not make the playoffs.

Strengths: Youth, talent and flexibility are some of the things the Jazz can count on this season. However, translating that into wins is a different story. Look for new head coach Quin Snyder to maximize that young energy next season by playing with a quicker tempo with an emphasis on ball movement. Utah does have big men that can run the floor like Derrick Favors, Enes Kanter and reserve high-flyer Jeremy Evans. They have addressed some shooting concerns, especially from 3-point range with the addition of Steve Novak, drafting Rodney Hood out of Duke along with shoring up their frontline with the addition of Trevor Booker, who should give them some toughness and the ability to score inside. Utah will have to rely on Gordon Hayward, Trey Burke and Derrick Favors to lead the team.

Weakness: To say the Jazz struggled last season on defense would be an understatement. Utah was in the bottom half of the league allowing 102.2 points per game. While Favors and Rudy Gobert are good rim protectors, it will take a total team effort to really turn things around. Shooting from the field was another thing that plagued the Jazz, as they were the seventh worst shooting team from the field with a 44 percent field goal percentage. With the new core of players and an emphasis on player development, it should help the team improve their shooting this season.

Outlook: For the first time since the 2011 departure of Deron Williams, there is reason for long-term optimism in Utah. While the team had draft assets and cap flexibility over the past few years, however, a return to contention was always theoretical without a player in the fold who realistically could become a star. With Dante Exum, a Jazz player with serious upside, the team may finally have that coveted asset. In the brutal Western Conference, Utah does not have any realistic hopes of contending for the playoffs this year. But with young players like Favors, Kanter, Trey Burke, and Gordon Hayward, the Jazz have solid blocks moving forward to build a contending team in the near future.