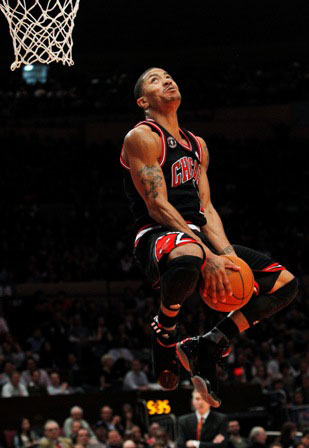 OK, for 82 games we’ve heard all the talk and hype to last a lifetime. It’s time to put up or shut up. The basketball playoffs are here!

It’s been a season that has been entertaining to say the least. From the Los Angeles Clippers’ Blake Griffin jumping over a car to win the Slam Dunk competition at the All-Star Game, to all the annoying hype surrounding LeBron James and “The Decision,” he and his band, um, teammates, “The Heatles” declaring  that they would win not one, but multiple championships.

To the Denver Nuggets giving Carmelo Anthony what he wanted – a trade to the New York Knicks. That only caused the Nuggets to rise to the occasion without him and become a legitimate playoff team while the Knicks have been about as mediocre with Anthony in the lineup as Nuggets were when they had him.

Then there are the aging but proven powers like the San Antonio Spurs, Boston Celtics and Dallas Mavericks teaching the youngsters a thing or two about winning. And then there are the defending NBA champion Lakers, who… well all they do is win, in spite of struggling at the end of the regular season.

The road to the NBA championship is wide open this year with as many as six teams that could make a strong run and take home the Larry O’Brien trophy in June. The Knicks are a meager 15-19 since the Anthony trade and the Nuggets are 22-8, leading everyone to wonder – especially fans in New York, who got the better part of the deal? But give the Knicks credit. Anthony along with Amar’e Stoudemire have been the spark the Knicks needed for a long time to get them into the basketball playoffs for the first time since 2004.

“I don’t know about the Knicks,” said accountant and Knicks fan David Knox of Los Angeles. “I don’t think they can win without a center. Chauncey Billups is a great point guard and will make a great coach someday. I think in the [Mike] D’Antoni ‘push push’ system, a banner won’t be raised in Madison Square Garden until this is abandoned.”

The Nuggets are the fifth seed in the west, while the Knicks come into the basketball playoffs as the sixth seed.

Limping into the basketball playoffs are the Lakers, Spurs and Celtics. All of which have endured season-ending losing streaks, but it doesn’t mean that they won’t be in top playoff form. And don’t count out the young upstarts Oklahoma City Thunder and the NBA’s leading scorer Kevin Durant, which gave the Lakers fits in last year’s basketball playoffs.

With all the talk and hype surrounding James, Dwayne Wade, Chris Bosh and company in Miami, the one team no one wants to face is the Chicago Bulls. The Bulls have the Eastern Conference’s best record and are led by Most Valuable Player candidate Derrick Rose.

Rose averaged 25 points and 7.8 assists a game during the regular season, and is so good and so confident of a player that he all but declared that he would be the MVP at the beginning of the season, and after a game against the Orlando Magic on national television, he embraced the Magic’s Jameer Nelson and told him, “see you in the second round.” That may inspire the eighth seeded Indiana Pacers who the Bulls play in the first round of the basketball playoffs.

But some fans don’t think that the Bulls have what it takes just yet to win it all.

“The Bulls are too young,” said Donna Lewis, a teacher’s aide in Long Beach, Calif. “But that can be a good thing too. San Antonio is the number one seed, but with teams like them and Boston and the Lakers, you have to wonder if age is finally going to catch up with them this year. I love the Celtics, but Ray Allen looks tired and Shaq [O’Neal] is done and I don’t think you can win without a big man. Ultimately I think the Lakers will win it again.”

You can never go wrong with the experienced teams that have won championships in the past 10 years.

The Lakers, Celtics and Spurs have that experience, as well as Wade with the Heat and are all obvious choices to win it all. The Heat reloaded having James and Chris Bosh and became an immediate contender. But it is playoff time and you have to wonder which James is going to show up – the regular season MVP candidate or the one who seems to falter when it matters most in the basketball playoffs?

As players and teams get old, someone new eventually rises to the occasion and ushers in a new era. Magic Johnson and Larry Bird did it in the 1980’s Michael Jordan did it in the 1990’s and Kobe Bryant in the past decade.

Rose, Carlos Boozer and the rest of the Bulls have been on a roll all season long and it doesn’t seem like they’re going to stop anytime soon. Look for the Bulls to defeat the Lakers in the Finals for the first championship in the post Jordan era and sending former Bulls and current Lakers Coach Phil Jackson into an ironic retirement.