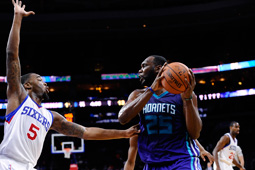 The newly christened Charlotte Hornets will rely heavily on the inside prowess of Al Jefferson (Photo Credit: AP Photo/Michael Perez).

Playoffs: Lost to San Antonio in five games in the NBA Finals.

Strengths: Without LeBron James, Miami still has plenty of star power with Dwayne Wade, Chris Bosh and newly signed Luol Deng along with one of the best head coaches in the NBA in Erik Spoelstra. Last year’s stats may no longer be relevant without James, but it’s worth noting that Miami was one of the best teams on both offense and defense last season. On offense Miami averaged 102.2 points per game, 12th in the NBA and shot 50 percent from the field, which was No.1 in the league. Defensively, the Heat allowed just 97 points per game, which was fifth in the league. Losing James will hurt on both ends, but this is still a talent rich team, so the drop off won’t be so huge for Miami like it would be for some other teams losing their best player.

Weaknesses: Over the past few years, Miami has played a number of veterans who were clearly in the twilight of their careers like Ray Allen, Shane Battier, Chris Andersen, and Rashard Lewis among others. Although most of those players are gone, Miami still has an older roster. Some of Miami’s prime players like Wade (32); Bosh (30) and Deng (29) are showing signs of decline. And if injuries begin to mount for an older roster, it could have an effect on the Heat long term. On the court, Miami’s defense and three-point shooting could regress this season due to roster changes.

Outlook: Despite losing Lebron James in free agency, Miami could have blown up their roster and went into rebuilding mode. But give Pat Riley and his staff credit for rebuilding and retooling his team by bringing back most of the same players and bringing in some new additions that could give the Heat a different dimension while still accomplishing the same objective. The Eastern Conference is still weak and maybe the Heat is a notch below Cleveland and Chicago, but there’s a lot to like about this roster despite James’ exit and it will be interesting how far Miami can go without him. Bosh was given the dollars during the off-season to be Miami’s No. 1 option going forward, similar to the role he had with the Toronto Raptors prior to his departure.

Playoffs: Lost to Miami in five games in the Eastern Conference playoffs.

Strengths: The Hornets are one of the few teams in the entire league with a dominating low post presence offensively. The presence of Al Jefferson on the interior gives Charlotte an edge in the paint on most nights. Kemba Walker also has a solid knack for getting into the lane and finishing in his own right. The arrival of Lance Stephenson will put even more pressure on teams trying to keep the Hornets from camping on the interior. The Hornets also improved significantly defensively by adding Stephenson. Michael Kidd-Gilchrist will eventually become one of the league’s better perimeter defenders and while Jefferson isn’t a defensive juggernaut he has played extremely well in Steve Clifford’s system.

Weaknesses: While one of the Hornets’ biggest strengths is having guys adept at finishing in the paint, one of the team’s biggest weaknesses will be knocking down three-point shots – consistently. This will give their opponents an opportunity to sag off defensively and protect the paint. The pressure will be on Gary Neal, Gerald Henderson, Kemba Walker and Lance Stephenson to consistently knock down these shots to make Al Jefferson’s job easy on the inside.

Outlook: Outside of Cleveland and Chicago, no Eastern Conference team improved themselves quite as much as the Charlotte Hornets did this past offseason. Obviously, luring Lance Stephenson away from Indiana was a huge coup for them, and it definitely shores up their backcourt rotation.  Rookies P.J. Hairston and Noah Vonleh both were pretty incredible values where they were selected in the draft and both could contribute on this roster right away. Steve Clifford has quickly become one of the better coaches in the conference, and Al Jefferson shouldn’t be any less effective than he was a year ago. Without question, this is a team on the rise, and while they’re only ranked second in the Southeast Division in these projections, they could just as easily win it their first year as the Hornets.

Strengths: The Wizards’ starting five is a thing of beauty on paper. They have the potential to outshoot you from long range (Beal), create havoc and penetrate the lane at will (Wall), pound you into submission on the interior (Gortat and Nene) or score from either elbow with ease (Pierce).  But they will be challenged with Beal suffering from a broken wrist and out of the lineup for six weeks. From an offensive standpoint, the 2014-15 Wizards are a dynamic unit capable of playing a variety of styles on any given night.

Weaknesses: Washington has plenty of “name” power in their starting lineup, but their overall depth is nowhere near as strong. With the exception of Pierce, presumed starters Beal, Gortat, Nene and Wall have all missed at least 20 games due to injury over the last few seasons. Pierce, on the other hand, is 36 years old and “Father Time” could come calling at any minute. This puts a lot of pressure on being ready for duty on Otto Porter, Andre Miller, Kevin Seraphin, Kris Humphries, DeJuan Blair, Martell Webster and Drew Gooden.  If the Wizards are hit by injury, especially in the backcourt, the team will struggle due its lack of depth. Defensively, the loss of Ariza takes away a surefire perimeter lockdown defender. No one else on the Wizards’ roster has that type of skill set, so the team will need to adjust its defensive style to compensate.

Outlook: The Wizards showed last year that Bradley Beal and John Wall are one of best young backcourt combinations in the league right now. Nene and Marcin Gortat also are a unique frontcourt combination that pairs two gigantic, traditional big men against a lot of teams that are rostering less physical stretch-four types as their new-age “power” forwards. In their first round matchup against the Chicago Bulls last year, for example, those two guys simply overpowered one of the league’s better defensive teams. Most organizations just aren’t equipped to deal with them, especially when Beal and Wall are so good from deeper out. No one wanted to see Trevor Ariza go, but snagging Paul Pierce as his replacement should do wonders for the team’s confidence. He’s the only player on the roster with a ring, and that leadership could help take the Wizards to the next level this year. People like Washington a lot, but that’s only because there’s a lot to like here.

Playoffs: Lost to Indiana in the Eastern Conference Playoffs.

Strengths: The Hawks’ assortment of talented big men who can play multiple positions is a luxury any head coach would love to have in their situation. Horford and Millsap were developing a very solid chemistry on the floor together before injuries hit and both could make a run at an All-Star selection this season. Forward Mike Scott displayed flashes of his potential throughout last season, but made an even bigger statement during the first round of the team’s playoff series versus the Indiana Pacers. Elton Brand is an established veteran who is still productive in spurts, while Pero Antic performed admirably when the rash of injuries infiltrated Atlanta. Rookie Adrian Payne has great potential but the Hawks are so deep in the frontcourt it will be tough for him to carve out consistent minutes in his first season as a professional. Budenholzer has plenty of options at the power forward and center positions.

Weaknesses: Atlanta remains one of the league’s most balanced teams. They have capable shooters, guys who can play multiple positions, decent depth and a few All-Star caliber talents on the roster. But NBA titles rarely feature offenses without a dynamic presence that can take over a game at will. The 2013-14 champion San Antonio Spurs are a rare example of a balanced offensive attack getting the job done. Horford has shown glimpses of being able to become a 20+ point per game scorer but he’s unselfish to a fault and will defer for long stretches. This must change. Horford, Millsap or Teague must take their offensive games to the next level. If this occurs, the second round of the playoffs might not be the ceiling for this team in 2014-15.

Outlook: It seems like every year basketball fans shrug off the Atlanta Hawks as this middling, uninteresting Eastern Conference team that nobody (including a lot of people in Atlanta) particularly care about. With new ownership apparently coming, there’s no telling if the team will even remain there long-term, but what is pretty clear is that, once again, the Hawks head into the season as one of the most underrated teams in the league. Mike Budenholzer is among the league’s best up-and-coming head coaches, and his team should be more competitive this year now that Al Horford is healthy again. They made the playoffs without him last year, and with essentially the same core returning this season (plus Thabo Sefolosha and Adrian Payne), they will have a great opportunity to end up there again come spring.

Strengths: The Magic have a lot of young talent on the team and the sky is the limit for them. The team really hammered home the idea of defense by adding Aaron Gordon and Elfrid Payton through the draft. The team should improve on last season’s mid-ranking defense and look to get into the top-10. The Magic’s young core of Tobias Harris, Maurice Harkless, Nikolas Vucevic, Kyle O’Quinn and Victor Oladipo are growing in the league together and have developed great chemistry on and off of the court. The Magic want to build a team full of high-character guys and they seem to have that. This aspect of the team may be underrated and when the time comes for them to start winning, the chemistry portion of the equation will already be solved.

Weaknesses: The question everyone seems to have is where will the offense come from? While Payton and Gordon are praised on the defensive side of the ball, they are far from praised on the offensive side. Replacing Aaron Afflalo’s 18.2 points per game will prove to be a difficult task, so the team will lean heavily on Harris, Vucevic, Channing Frye and Oladipo to make up Afflalo’s production. As mentioned above, the team finished just inside the top 20 in the league in three-point shooting, but will the addition of Frye prove enough to be the solution? The Magic also added Ben Gordon, a career 40-percent three-point shooter, but he hasn’t received significant playing time in over a year and has reportedly clashed with just about every coach he has had.

Outlook: All of a sudden, the Southeast Division is pretty nasty, with Washington, Charlotte, Miami and Atlanta all looking like potential playoff teams in an undeniably weak Eastern Conference. Orlando, meanwhile, is farther away from experiencing massive postseason success, but they’ve drafted more than enough promising kids the last few drafts to justify optimism for the future. Victor Oladipo should take a huge step forward this year, while mainstays like Nikola Vucevic and Tobias Harris add plenty to the mix, as well. Newcomers Channing Frye, Evan Fournier, Aaron Gordon and Elfrid Payton make this young group even more interesting, though the Ben Gordon signing remains among the most confusing of the offseason. There are a lot of new players to integrate here; many of who still have some on-court maturation to experience before the Magic can compete seriously for a playoff spot.

Prediction: 30-52, 5th in Southeast Division does not make playoffs.