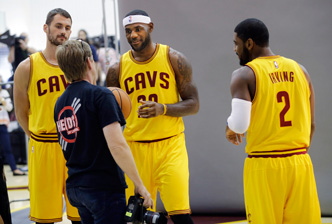 Playoffs: Lost to Washington in five games in the Eastern Conference Playoffs.

Strengths: As long as Thibodeau is there as the head coach, Chicago is one of the best defensive teams in the NBA as they were No. 1 in the league in holding its opponents to 91.8 points per game, and second in opponents’ field goal percentage, allowing 43 percent shooting. The Bulls were in the top 10 in the league in rebounds and blocked shots and should not have too much trouble duplicating that success this season despite improvement from teams in their division, such as Cleveland.

Weaknesses: Outside of guard Derrick Rose, the Bulls don’t have too many playmakers in the backcourt. Jimmy Butler, Tony Snell, Mike Dunleavy and Doug McDermott all have their strengths, but none of them specialize in ball handling which means Derrick Rose, Kirk Hinrich and Aaron Brooks will have to have the ball in their hands a lot. Jimmy Butler is eligible for a contract extension until the start of the season; otherwise he will become a restricted free agent next summer.

Outlook: If we have learned anything about Chicago since Thibodeau arrived there it is the Bulls will always be one of the league’s most successful regular season teams. This year, they may have more talent on their roster than any other Eastern Conference team besides Cleveland. But now comes the question of Derrick Rose being healthy and really how far can Chicago go? What makes Chicago more exciting is the depth along the frontline, especially with the addition of Pau Gasol upfront. Simply because of the way Thibodeau values the regular season, they probably will end up with the best record in the Eastern Conference.

Strengths: Obviously, the Cavaliers are going to score a ton of points, as spelled out in glorious detail above, and with so many strong shooters they’ll probably be among the league leaders in three-pointers attempted next season. To call offense the strength for these guys actually feels like underselling it, and that combined with the star power in the starting lineup will be enough to intimidate a lot of NBA teams. It worked for the Miami Heat the last four years, so there’s no reason that a better, deeper Cavaliers team shouldn’t also get some wins through intimidation alone.

Weaknesses: While James is a perennial guest of honor at the All-Defensive Team voting party, and role players like Anderson Varejao and Shawn Marion both have earned reputations as solid defenders, the reality is that this could be a rough year for Cleveland defensively, thanks in large part to Kyrie Irving and Kevin Love, two guys that will be on the floor a lot yet often fail to properly defend people. Love simply cannot protect the rim, and last season, Tristan Thompson was even worse. This team is mostly comprised of players that haven’t historically put much effort into the defensive end of the basketball court, and that if anything, could be Cleveland’s undoing.

Outlook:  The fact alone that LeBron James is home immediately puts Cleveland in the conversation for this year’s championship, but also the addition of Kevin Love makes it even more inevitable that this team will delve deeply into the 2015 postseason when the time does ultimately come. Concerns about Love and Kyrie Irving never having played an NBA playoff game are kind of overblown, mostly because James has been to four straight NBA Finals and has won two of them. James Jones and Mike Miller won rings with the “King” in Miami, and Varejao has experience going deep into the playoffs as well. In other words, this isn’t a locker room devoid of championship experience; so two major stars (one of whom has an Olympic gold medal) shouldn’t have much problem adapting. Except for maybe the Chicago Bulls, it’s hard to envision any other team representing the East in this year’s Finals.

Playoffs: Lost to Miami in six games in the Eastern Conference Finals.

Strengths: Defensively, the Pacers were one of the strongest teams in the league last season, and while they lost a couple of really talented two-way wings, there’s still plenty of reason to believe they’ll be a respectable defensive team again this season. They were second in the league last year in opponents’ PPG at 92.3, and they were first in opponents’ field goal percentage at .420. They also were sixth in the league in team rebounds and fifth in blocks. A lot of that has to do with Hibbert and West who are still there and still healthy, and Vogel knows how to coach defense. Put simply, the games they win this year will be won because they dominated defensively. It might not be exactly the same as last year, but they’ll still be plenty formidable on that end of the floor.

Weaknesses: Indiana was 24th in the league in team points per game last season, scoring only 96.7 PPG, and this year should be even worse as they lost two of their top three scorers in Paul George (22.6 PPG) and Lance Stephenson (13.6 PPG) without getting the kind of replacements that can duplicate those numbers, let alone exceed them. Expect it to be another long, grueling year watching a disjointed offense from the Pacers. What already was ugly just got uglier. The Pacers have 19 players under contract but only 12 are fully guaranteed.  Luis Scola’s deal is partially guaranteed and the veteran forward appears to be a lock to stick, leaving just two spots for the six remaining.

Outlook: It’s hard to know where the Pacers will end up this season, but we can at least say this with a fair amount of certainty: no team loses its two best players and gets better. Having lost Lance Stephenson to free agency and Paul George to a leg injury in the World Cup, Indiana will start the season without 40 percent of its starting lineup, and what remains doesn’t exactly elicit a ton of confidence for a return to the postseason. The mercurial Roy Hibbert is now the team’s best player, but his inconsistency is pretty well documented. George Hill, David West and a cast of so-so bench players won’t be enough to survive what looks to be an absolutely barbaric Central Division this year. The Pacers have been a feel-good story for a few years now, an easy group of guys to like, but they probably won’t even make the playoffs this year.

Strengths: The frontcourt duo of Andre Drummond and Greg Monroe will once again do much of the heavy lifting for the Pistons. The two proved last year, despite some skepticism, that they can not only coexist together in the paint, but also excel. The combination will again be a major concern for opponents and a major strength for the Pistons. Van Gundy has a career winning percentage of 64.1 percent and has had success in the playoffs. The Pistons aren’t going to become a contender overnight but will be in good hands going forward with Van Gundy at the helm.

Weaknesses: Even with the acquisitions of Jodie Meeks, D.J. Augustin and Caron Butler, all capable three-point shooters, it’s hard to imagine the Pistons lighting it up from the perimeter. The problem being that two of Pistons highest usage rate players, Brandon Jennings and Josh Smith, are also two of teams’ most inefficient players. Both settle for poor outside shots far too often and despite their past struggles, they so far haven’t been willing to adjust their game. If the team hopes to improve offensively, the first step will be reigning in both Smith and Jennings.

Outlook: Since Flip Saunders was fired back in 2008, the Detroit Pistons have gone through a staggering six head coaches, the most of any team in the league over that period of time, but the future looks pretty bright now that Stan Van Gundy is bringing some stability to both that position and that of President of Basketball Operations, mercifully vacated this offseason by Joe Dumars. There is a lot to like in Detroit right now, but most of that optimism resides in the frontcourt, with burgeoning superstar Andre Drummond coming into his own and steady big man Greg Monroe heading into a contract year. Free agent acquisitions like Jodie Meeks, Caron Butler and D.J. Augustin were perhaps more expensive than they should have been, but they all add shooting to a team that really needed it, and with the new coach and another year with a promising core, it looks like they’ll be right back in the conversation for a playoff spot this year, even if Josh Smith only shoots 20 percent from the field.

Prediction: 39-43, 4th in Central Division, does not make playoffs.

Strengths: The Bucks are loaded with young, long, talented athletes. Offensively, they will be best in the open court, as the Bucks have a number of guys who will be able to run and finish on the break. On the defensive end, they have two great shot blockers in John Henson and Larry Sanders; their ability to protect the rim will help cover up some of the Bucks’ other shortcomings on that end. The group of young assets the Bucks have assembled has the chance to develop into a very good team. They may not be great next year, but fear not Bucks fans, as the future is bright. If nothing else, this team has a number of young players that should be fun to watch while they grow.

Weaknesses: While the team’s young assets may be the Bucks’ biggest strength in the long run, it will also be the team’s biggest weakness next season. The team will start the season with nine players under the age of 25. The inexperience of the group will lead to mistakes on both ends on court and will surely frustrate new head coach Jason Kidd, who will go from coaching a veteran-laden Brooklyn Nets team to this young Bucks squad. It’s inevitable that when you build a roster from the ground up, it’s going to take time.

Outlook: Getting a player like Jabari Parker is a turning point for an organization like the Milwaukee Bucks, who are only ever going to be perennially dominant if they land major stars in the draft. Giannis Antetokounmpo is another guy that will be undeniably exciting to watch as he enters his sophomore campaign, but getting a charismatic and talented leader like Parker is the start of what should be a seismic shift for this organization. Obviously, it won’t all happen at once, especially not when the two best teams in the Eastern Conference are in the Bucks’ division, but this year will be a step in the right direction for Milwaukee, who finally has the most important building blocks for its future.

Prediction: 35-47, 5th in Central Division, does not make playoffs.