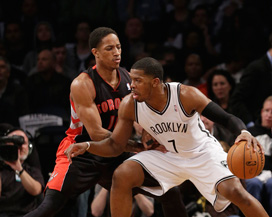 Playoffs: Lost to Miami in five games in the Eastern Conference Semifinals.

Strengths: Despite losing Shaun Livingston, Andray Blatche and Paul Pierce in free agency, the Nets are still a fairly deep team. But talent has not been an issue with this club; it’s been more about finding their identity. With Lionel Hollins, Brooklyn hopes to mimic the success Hollins had with Memphis where he led that team to a combined record of 183-129 in four full seasons as the head coach. With Deron Williams, Joe Johnson, Brook Lopez, Jarrett Jack and an impressive group of youngsters that includes Mason Plumlee, the Nets have enough to contend in the Eastern Conference. It will be just a matter of how Hollins will make it all work.

Weaknesses: Age and attrition. While Brooklyn has one of the most talented starting lineups in the NBA, Brook Lopez is the youngest member of the starting five and he doesn’t have a record of exemplary health. While there is more upside with players such as Mason Plumlee, Mirza Teletovic, Bojan Bogdanovic and Marquis Teague, Brooklyn will be counting on an aging core of veterans to get them past younger, spryer teams in the Eastern Conference. Deron Williams must comeback with a big year after being out most of the last two seasons with ankle injuries.

Outlook: The Nets were one of the highest profile teams in the league last year, but seemed to have fallen off the radar completely with all of their losses in free agency. But there’s reason to believe Brooklyn can be better than last year. You may remember two seasons ago the Nets won 49 games with Williams and Lopez healthy. If they can get back to that form from that year, the Nets could easily surprise for a team many are predicting to miss the playoffs. But they are in the Eastern Conference and teams will always have a chance in the East.

Playoff result: Lost to Brooklyn in Eastern Conference first round.

Strengths: Toronto is a defensive-oriented team stemming from the principles of head coach Dwane Casey. In spite of being one of the youngest teams in the league, the Raptors have gained a significant amount of experience together and should have a leg up on the competition from a chemistry standpoint, which gets overlooked when predicting what kind of team you’re going to have. DeMar DeRozan and Kyle Lowry form one of the best backcourts in the league and with another step forward this year Jonas Valanciunas could end up being regarded as one of the premier centers once the season has come to a close. As a team, Toronto shot 37 percent from the 3-point line last season, among the best in the NBA.

Weaknesses: Last season DeMar DeRozan and Kyle Lowry missed a combined six games total. It’s very rare to have that kind of fortune in this league and if the Raptors don’t have it again this season, it’s hard to see who is going to be able to step up and replace their scoring. Their second unit is full of solid players, but only Lou Williams and Terrence Ross have truly explosive scoring capability. This team can really use a stronger third offensive scoring option, primarily from the small forward position. Toronto can also benefit from an offensive rebounder as well and they have options in Valanciunas, Amir Johnson, and Patrick Patterson but which one of them will step up and give Toronto that punch they need.

Outlook: Many people have forgotten that Toronto won the Atlantic Division last season despite bowing out to the Nets in the first round. They don’t have a true superstar, but as a regular season proposition, they are a solid bet to improve on last year’s performance due to the youth on the roster. Jonas Valanciunas and DeMar DeRozan seem primed to take significant steps forward on both ends. If there’s an emergence at the small forward spot, the Raptors could have a breakout year. While the lack of a true superstar power forward and a pretty big hole at the small forward spot could sink them in the playoffs, for the regular season, the Raptors are solid indeed.

Strengths: New York will not have problems putting up plenty of points as last season the Knicks ranked 11th in the NBA in offensive efficiency averaging 105 points per game. While the re-signing of Carmelo Anthony to a max-deal might comeback to hurt New York, it ensures that one of the NBA’s best scorers will be in New York for the foreseeable future. With the implementation of the triangle offense, it should help increase efficiency once the team becomes comfortable with the new offense and they work out the kinks.

Weaknesses: While scoring won’t be a problem, stopping the opposition from scoring almost certainly will. New York ranked 24th in defense efficiency last season and finished 27th out of 30 teams in the league in total rebounds. While the Knicks upgraded their point guard position, the Knicks had to sacrifice their best defensive player in center Tyson Chandler going to Dallas. Chandler struggled last season recovering from a multitude of injuries. But his energy, defense and rebounding will be missed as he led the Knicks in rebounds and shot blocks the last three seasons.

Outlook:  With Derek Fisher taking over in NYC, he and President Phil Jackson have invested heavily in Carmelo Anthony and the vision he can be effective in the triangle offense. And while that’s a safe bet, what the Knicks fortunes may hinge upon this year is on how effective big men Samuel Dalembert and Jason Smith will be in manning the paint. There are some questions marks with how many minutes Amare’ Stoudamire can give you every night and if Andrea Bargnani can produce close to the career average of 15 ppg. he’s been having in his career. And J.R. Smith will be counted on to be Anthony’s right hand man. If those questions are answered, the Knicks could be competitive sooner rather than later.

Prediction: 40-42, 3rd in Atlantic Division, does not make playoffs.

Strengths: Boston’s roster is packed with youth and athleticism giving them the advantage to get out and run. Stevens’ up-tempo system allows Rondo to play in transition and create match up problems when players one through five can move up and down the court. Drafting Marcus Smart is an insurance policy given the uncertainty of Rajon Rondo’s future on the team. The 20-year-old from Oklahoma State enters the NBA at 6-4, 220 pounds. Now Boston has backcourt security for the future and a gritty player who can play both guard position. Sullinger is no longer the young guy among a group of veterans. Sullinger could have a breakout year in his third NBA season.

Weaknesses: The team lacks a true identity after being contenders for many years. Rather this is the time when they are developing who they will become in the future. The Celtics do not have the star power they boasted during the “The New Big Three” era. The one remaining player from that period (Rondo) may not be around the entire season. Boston lost a lot of the scoring they had during their championship years and it will be difficult to improve much on last year’s 27th ranked attack.

Outlook: No question, Boston is in the midst of a rebuilding process that president of basketball operations Danny Ainge long predicted would take place when Garnett, Paul Pierce and Ray Allen were no longer in the fold. However, the biggest cloud hanging over Boston heading into training camp is the future of All-Star guard Rajon Rondo. There are some solid young assets on the roster and a few veterans who have been in their share of battles over the years. Playoff talk might be a stretch with this team even with a healthy Rondo, but Boston will be competitive on a nightly basis.

Prediction: 34-48, 4th in Atlantic Division, does not make playoffs.

Strengths: Pairing a reigning rookie of the year in Michael Carter-Williams with two possible impact defensive players in Nerlens Noel and Joel Embiid. There is no pressure to accomplish anything great this season. Going into a year knowing that your team will not be contending for much is a bit of a downer for Sixers fans, but it will give the young core an opportunity to develop and grow naturally, at least for now.

Weaknesses: Not too long ago, Philadelphia came within one win of earning the right to play Miami in the Eastern Conference Finals during the 2012-13 season. Since then, the team was slowly dismantled. The lone holdover, Thaddeus Young, was recently dealt, meaning not one player remains from as recently as two seasons ago. The question is will the new management in Philadelphia give the coach and general manager time to develop the talent? The Sixers do not know what it takes to be a consistent winner in the NBA. The lack of experience will put them at a great disadvantage, but that is to be expected.

Outlook: Sixers General Manager Sam Hinkie was lauded and ridiculed for his approach last season. Right now Philadelphia has some talent that will take at least a season to develop. And in addition, they have some draft picks to use to get even better. Can Brent Brown continue to coach up his young talent to be competitive every night or will he be given time to develop that talent? Philadelphia has about $30 million below the salary floor, so at some point in the next few years one would think they would finally spend to acquire complementary talent. But that certainly seems unlikely for this season and maybe even next season.

Prediction: 30-52, 5th in Atlantic Division, does not make playoffs.