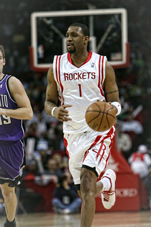 Hall of Famer Tracy McGrady is undeniably one of the best basketball players born and raised in the state of Florida.

The Best from the Sunshine State

Like Louisiana, Florida is widely considered a football state, especially in the college ranks.

College football programs like Florida, Florida State and Miami have produced standouts on the gridiron like Deion Sanders, Tim Tebow and Andre Johnson.

Nevertheless, since the mid-1990s, the Sunshine State has also produced some of the greatest basketball players of a generation.

Even going back to the 1960s and 1970s, Florida produced some Hall of Famers on the hardwood.

Therefore, in honor of the legends from Florida, RegalMag.com would like to place some sunshine on some NBA players who shined for years with the round ball in their hand.

So without further adieu, RegalMag.com presents its all time, All-Florida NBA team featuring players who were raised in Florida or played high school basketball in the state.