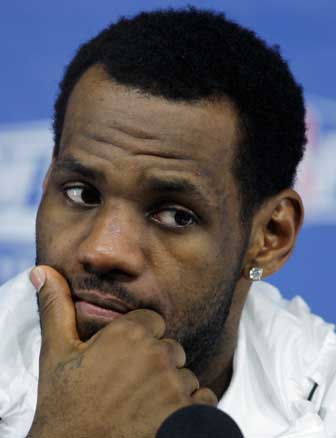 James listens to questions during a news conference after losing Game 6 to the Boston Celtics (Charles Krupa/AP).

LeBron James—King of Basketball: Where Should He Hold Court Next?

Many have written about the lackluster performance of the Cleveland Cavaliers’ star player LeBron James during the NBA playoff series against the Boston Celtics.

With a team that included Shaquille O’Neal and James, a ring should have been on the horizon. The sports scene is abuzz with rumors about where the new LeBron James team will be if he leaves the Cavaliers as well as the impact on the team and the city of Cleveland.

There is talk about the LeBron James team being the New York Knicks and their interest in acquiring the player known as the “King” and the boost he would bring to “The Big Apple.”  New York City’s Mayor Michael Bloomberg has even offered his support in trying to woo basketball’s mega star.

Other locations that seem high on the consideration chart include Chicago with reported sightings of James house hunting in the area.

Ask the general public about this weighty decision regarding where the new LeBron James team should be and you get mixed reviews. For some, it provides a much needed distraction to the overall economic picture.

“For LeBron, at this point in his career, there is no other place but the ‘Big Apple’ and the Knicks,” states Guy Madison, principal general manager, consulting in Atlanta. “Let’s talk about what needs to happen and where. Look at Earl ‘The Pearl’ Washington, who was arguably one of the baddest players in the league in the 60s and 70s. He could not get a ring until he came to the Knicks. If you can make it there…you know the rest. Or, he could come to the Hawks and run this town!”

For others, it is a matter of keeping him where he is now.  The LeBron James team represents big business and that has helped the Cleveland economy greatly, so there is a vested interest in keeping him there.

“As a native Ohioan, I would like LeBron to remain with Cleveland.  But he should do what is best for him,” comments Michael A. Henry, IT project manager, New Jersey. “I would hate to see him in a Knicks uniform!”

There are those who are more interested in the overall impact on basketball itself instead of the emphasis on the “LeBron James team” effect.  “Wherever he ends up, I am most concerned that it will be good for basketball and good for his team in the long run,” adds Randy, public relations specialist from Detroit.

According to Elene Patton, a community advocate in California, “LeBron should stay in Cleveland. He is a franchise player with roots to that community. It is in the best interest of his legacy and his personal franchise to stay there. What needs to happen is that the owners need to bring him two other players who will enhance his game. The great teams always have two or three. If you look at the league now you will see that there is not one top team that only has one great player.”

However, her 13-year-old son Joshua who, along with his older brothers Justin and Jerrod, has the height and drive to be a future sports star has a different view. “LeBron should go to Chicago. They already have Derrick Rose, Kirk Hinrich and Joakim Noah. If LeBron were added to that team, they would be the team to beat!”

The final decision is up to him as to the location of the new LeBron James team. The overall effect on basketball will be determined on the courts as the sport has survived many other player moves and transitions.

Unfortunately, the cities that do not always match up to “prime time” locations often suffer because star players are lured to bright lights and big dollars.

“If LeBron James leaves the Cavaliers, no matter where he goes, I don’t think he would be as close to winning a title as he has been in Cleveland.  The league’s marquee teams, with cap room to sign James, are struggling or would likely lose other key players changing the dynamic once James arrived. There are no guarantees.” notes Mike, media relations consultant from South Carolina. “Personally, I would love to see LeBron move to Detroit.  The Pistons are among the winningest teams in the last decade and they are in desperate need of a franchise player to get them back in the mix.”

James, like many athletes and their owners, match their success by the championships and not the overall career highlights and the positive economic impact on the cities they represent.

The LeBron James team may ultimately put him in line for an NBA title or he might be among other NBA greats including Bob Lanier, Patrick Ewing, John Stockton and Karl Malone and others who never got the trophy.  That takes nothing away from their contributions to the game, the positive impact on the cities in which they played and the love of their fans.

There are those who are calling LeBron James team decision a “franchise changing” one.  Where will LeBron James hold court next season? Only the King himself can say. Stay tuned!

To debate this issue and other issues visit our forum section.