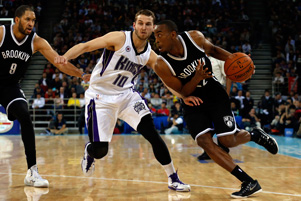 Are White Players Facing an Uphill Battle for NBA Respect?

In a league where nearly 80 percent of its players are African-American, is there a discrimation against Whites in the National Basketball Association?

Stauskas was selected eighth overall by the Kings in the 2014 NBA draft, and will be entering this season with the Kings expecting to be a target because he is White.

“It helped just hearing the love that I had from the crowd and seeing my family in the stands,” Stauskas said about his introduction to NBA competition.

Originally from Mississauga, Ontario, Stauskas is from Lithuanian heritage and has represented the Canadian National Basketball team in youth competition and was a part of the FIBA America’s Under 16 team.

He would play his high school basketball in South Kent, Conn. and would win the State AA championship in his senior year.

He would go on to the University of Michigan where he would be a starter by the seventh game of the season and in his sophomore year he would be a consensus NCAA All-American and would win Big Ten Conference player of the year.

Could Stauskas be inadvertently calling attention to the last publicly accepted realm for racial stereotyping–sports?

“Some people may have a problem with it, some people may not,” Stauskas said in defense of his comments about the perceptions of White players. “But if you’ve ever played the game of basketball, you understand that there are certain stereotypes and certain reputations that certain players have and based on that, people are going to play a certain way against you.”

After the racist comments that were made by former Los Angeles Clippers owner Donald Sterling, former NBA great Kareem Abdul-Jabbar was not surprised by Sterling’s remarks given his history, which has been over 30 years as an owner of an NBA franchise.

Abdul-Jabbar, who worked under Sterling for three months as a Los Angeles Clippers coach in 2000, offered his thoughts on the controversy, saying Sterling’s racially disparaging remarks revealed in a leaked voicemail were not a surprise given other discrimination over recent years.

On the set of ABC’s “This Week” with host George Stephanopoulos, after the racist comments were leaked out back in May, the retired six-time NBA champ said racism remains a part of American culture.

In a study done by the University of Toledo School of Economics, the study of labor market discrimination in Economics has often used sports as a platform, especially with the National Basketball Association (NBA).

The NBA provides fertile ground for the study of discrimination because of the wide racial and cultural shifts over its 50-year history.

Statistical discrimination may explain reverse discrimination because traditionally the best players in the NBA are African-American and over the past 25 years there have been few White American athletes to excel in the NBA.

However, there are a few who have had great careers and went on to the Hall of Fame like Larry Bird, John Stockton and Chris Mullin to name a few.

While there have been an influx of White international players from European and South American countries, White Americans are generally not considered elite athletes.

Thus, White Americans who aspire to the NBA may see lower wages, in the case where teams are able to exert monopolistic power, relative to African-Americans and international players.