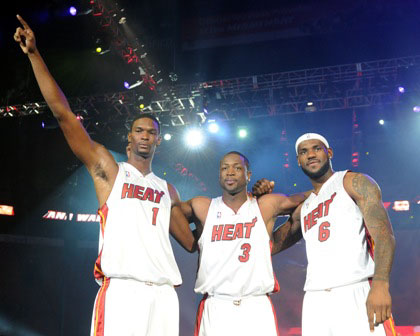 Will “The Decision” Yield the Result? Lakers, Heat Seen as Likely Finalists

By far the biggest moment in the NBA offseason was the hour-long ESPN special in which LeBron James made what he called “the decision” to “take his talents to South Beach” and in tandem with Chris Bosh and Dwayne Wade make the Miami Heat an instant championship contender as the 2010-11 NBA season gets underway.

Predictably, the James announcement was reviled in Cleveland and celebrated in Miami. Debates began regarding if three superstars can team together to bring home a title during the 2010-11 NBA season.

The most analogous situation occurred more than 40 years ago when Wilt Chamberlain was traded to the Lakers to join Jerry West and Elgin Baylor. The three Hall of Famers made it to the finals in 1969 and 1970, losing to Boston and New York. It was only after Baylor retired that West and Chamberlain led the Lakers to the 1971-72 championship by beating the Knicks in a five game finals.

Time will tell whether or not three is a crowd in Miami during the 2010-11 NBA season. Still, the affect on the NBA has been enormous and has meant extra attention for the league as the NFL starts its season and the baseball playoffs are in full swing. Fans are excited and already drawing battle lines.

“Kobe’s ice cold persona revolts me and I root against them whenever possible.  I had hoped LeBron would become a Knick,” said Andrew Sisolak, an attorney living in Monterrey, Calif. who grew up in New York.  “Once he pulled that news conference announcement [saying] how he and his buds were headed to the slick side of Florida, I started wondering how much HGH (Human Growth Hormone) it takes to get to his size.  I expect a showdown between those two teams.”

As bitter as Sisolak might be about the personalities on some of the league’s best teams, John Zajc of Cleveland understandably has a more resigned point of view.

“After the way I felt after ‘The Decision,’ I have antipathy toward the Miami Heat that clouds my judgment. I will admit they filled their roster with better players than I was hoping and they will likely represent the Eastern Conference, but I don’t see them setting a new record for most wins in a season. I think Boston may still be able to beat them in the Eastern Conference finals.

“I think if the Lakers can stay focused and healthy, they are still the best team in the NBA. Kobe’s will to win is stronger than anyone’s whom I’ve seen in years,” noted Zajc.

The lack of competition up and down the league as the 2010-11 NBA season starts bothers Zajc and Kathy Kobata, a UC Berkeley grad who follows the NBA closely.

“Lately it seems that the NBA suffers too much from talent pooling on the best teams,” said Zajc. “My Cavaliers should be right around .500, which should get them an eight seed — which may set up a first round series with the Heat.”

“I wish I could see the good citizens like Steve Nash and Grant Hill win one before they retire,” Kobata said. “But they don’t seem to have enough of a team to do so.  Kevin Durant may be the one to watch, although the Thunder will probably go nowhere unless they get him a (better supporting cast).”

Kobata also rues the decision made by James, Wade, and Bosh to team up in Miami for the 2010-11 NBA season. “I think the ‘Three Musketeers’ should have stood on their own and demanded their own Pippens.  I don’t see them as another Garnett/Allen/Pierce three-some who somehow managed to put their egos aside and play as a team (of course, they were older and more mature).  We’ve seen the likes of Karl Malone and Gary Payton going to supposedly championship caliber teams at the end of their careers in the hopes of a championship ring, which didn’t work, so the three Musketeers are thinking that they are younger and still at the top of their games so it’s a sure thing.  Hey guys, it’s a team sport, and talent alone won’t get you the ring.”

If conventional wisdom holds and we have a Hollywood vs. South Beach finals come June the 2010-11 NBA season will, at the very least, succeed in holding the interest of the sport-following public to a greater extent than any time since the Michael Jordan Bulls won their last title.