Kobe vs. Wade Battle Shows Irrelevance of All Star Games 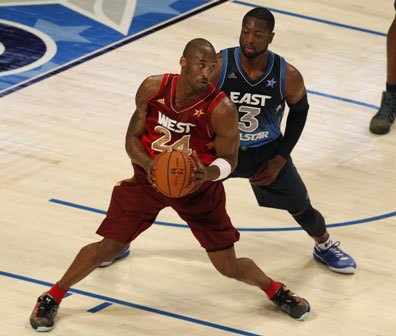 The competitive nature of the Kobe vs. Wade battle during the NBA All Star game showed the danger of possible unnecessary injuries to star players. (AP Photo/Lynne Sladky).

Does Kobe vs. Wade Flap Highlight All Star Irrelevance?

In the week between the NBA All Star Game and the showdown between the Miami Heat and the Lakers in Los Angeles, the primary story line was Kobe vs. Wade, as in what retribution might Dwayne Wade expect for breaking Kobe Bryant’s nose with a hard foul during the All Star exhibition.

As it turned out, the only retribution was 18 first quarter points by Bryant on the way to a game high 33 in the Lakers’ 93-83 win. Bryant wore a clear mask that looked a bit like 1970s hockey goaltender gear to protect his nose.

Otherwise, the game was pretty much business as usual. Miami looked like a team at the end of an opposite coast trip missing one of its best players (Chris Bosh) playing a recent league champion experiencing a bit of an uptick. Los Angeles led nearly the entire, drama-free game.

The Kobe vs. Wade flap occurred because many felt that Wade violated All Star game etiquette by fouling Bryant hard in the All Star Game. By all accounts the resultant broken nose was accidental, but a hard foul against a player having a good game is a regular season staple. Many thought it was out of place in All Star competition.

An editorial at latimes.com called the foul by Wade “inappropriate.” Bryant’s teammate and fellow All Star Andrew Bynum spoke out in Bryant’s defense after the incident.

“It was an All-Star Game,” Bynum said. “I don’t understand what that was all about. It was crazy.”

“I think it was out of place, out of line, for the moment and the game that it was, but I don’t think he intended to break his nose,” Gasol said to ESPN.com “He just fouled him kind of hard there and got his nose. But again, I don’t think it was the place to foul like that.”

The Lakers’ reactions are predictable, but even Bosh seemed to think Wade was a bit more aggressive than necessary. “It was already spicy enough,” he said to NBC Sports.com. “It’ll be something to play on the reels over and over before the game…So I’m sure it will be pumped up a lot.”

The reactions of players on both sides points out a problem with All Star competition in an era when star contracts can be worth hundreds of millions of dollars. The games are played on national television in front of fans paying significant premiums for tickets. Yet, ownership and the players’ main goal seem to be to avoid injury in an exhibition with no impact on the standings.

It’s worse in sports where hitting is fundamental to the game. After this year’s Pro Bowl, NFL Commissioner Roger Goodell said that he would look into the future of the game, and its discontinuation was not out of the question.

The NHL All Star Game is a nightmare for goalies. Without any checking or hitting, a sport where a typical score might be 3-2 is turned into a free skate with recent final scores along the lines of 12-9 and 11-10. Any resemblance to a real NHL game is incidental.

Only the Major League Baseball All Star Game serves up an approximation of the real thing. The elements of the game that are missing, breaking up double plays and running over the catcher are not as central to the competition as aggressive defense in basketball or the violent contact inherent in regular season professional football and hockey.

Pitchers are still showing their best stuff and hitters are competing hard in the batters box. It may also help that the winning league earns home field advantage in the World Series.

Goodell is probably on to something when it comes to reevaluating the Pro Bowl. Its TV ratings are low and the players have no motivation to risk injury by playing the game in a way the public is used to seeing NFL competition. That game is probably on its way out.

The hockey game is the culmination of a weekend of skills competitions and is still a showcase on U.S. network television for a league that is still playing catch-up with the other three big team sports. A true hockey fan can probably barely watch, but the game is not quite as bad as the Pro Bowl.

The Kobe vs. Wade incident points out the central problem of the NBA All Star Game. Someone who delivers a hard foul like Wade is vilified, and consequently the level of effort expended by all players in the game is called into question.

Still, a high scoring playground-style game is somehow more fun in basketball than in hockey, and the game consistently delivers highlight reel content for ESPN and the NBA Network.

Combine that with all the activities leading up to the game, and it’s hard to see the NBA making any significant changes. Ownership will just continue to hold its collective breath while its largest investments run and jump up and down the court in a game that doesn’t count.

Dizzy Dean’s career altering broken toe in 1937 and Ted Williams’ broken elbow in 1950 that probably cost the Red Sox the pennant aside, the MLB All Star Game will continue as the model pro sports All Star event.

The Home Run Derby is seen by many as a great way to spend a Monday night in the summer, and now that no one believes that a Pete Rose/Ray Fosse collision at home plate will ever happen again in the All Star Game and pitchers generally throw only one or two innings in the game, the injury risk is manageable.

What fans are seeing is a realistic big league game with a star at every position. That is a tough formula to beat.