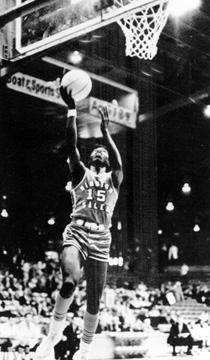 Even before he played at Winston-Salem State, Earl “The Pearl” Monroe’s exploits on the basketball court earned him nicknames like “Black Jesus,” “Einstein” and “The Lord’s Prayer” (Photo Credit: AP Photo/File).

On The Game’s song “Game’s Pain,” R&B singer Keyshia Cole sang, “And ever since the day I got the chance to make a change I’ve been in this game, it’s a new day and I’m making it known cause I just want the world to know I’m paying my dues, and I got the utmost, I just wanna let you know I’m paying homage cause you’ve paved the way for me.”

Unfortunately, those who pave the way for the next generation rarely get the credit they rightfully deserve and HBCU basketball players and coaches are no exceptions.

Because of color barriers, quotas and being blackballed, many pioneers of basketball are unknown and forgotten.

Not many remember McClendon teaming up with the innovator behind the “fall back baby” jump shot Dick Barnett and leading Tennessee A&I (Tennessee State) to three consecutive NAIA national championships from 1957 to 1959.

What about that watershed year of 1993, when Ben Jobe’s Southern Jaguars beat Georgia Tech 93-78 in the first round of the NCAA Tournament behind 27 points, 18 rebounds, three blocks and three steals from forward Jervaughn Scales?

Just like The Game thought it was his duty to educate new school rap fans on the exploits of the old school pioneers, RegalMag.com feels that it is its duty to take sports fans back to school to honor the best HBCU basketball players and coaches of all time.

* Stats according to CBSSports.com

** Stats according to Sports-Reference.com

*** Stats according to Basketball-Reference.com

$ Stats according to NBA.com

$$$ Stats according to ESPN

# According to New York Daily News

## According to the Tennessee Sports Hall of Fame

@@ According to Bleacher Report