Best NBA Player of all Time Tournament: Kobe vs. LeBron 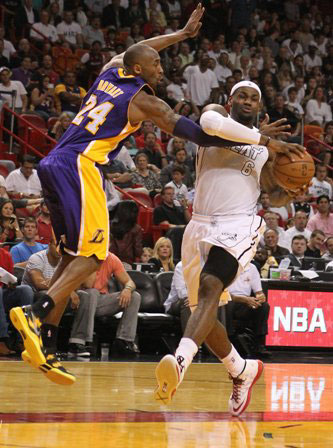 Who’s the Greatest of All Time?

We are finally down to the final two: Kobe Bryant vs. LeBron James.

Is there any surprise that these two made it to the finals? The possibility of Kobe going up against LeBron has been talked about for some time now.

Many wonder how these two would stack up against one another in a one-on-one matchup if both of these athletes were healthy and in their prime.

When you look at Bryant and all that he has accomplished so far in his basketball career, many people consider him to be the best NBA player of all time, or certainly the best of his era.

What makes this matchup even more interesting is that there are many people who also consider James to have the potential of being the best NBA player of all time. So, we took it to the fans to see who they thought would win in a one-on-one game if the two were to go head-to-head.

For some people, Bryant’s resume speaks for itself.

“Kobe Bryant is the best basketball player ever,” said 25-year-old Juan Gonzalez.  “A one-on-one setting is where Kobe would thrive. This is where he’s meant to do his thing and there’s no stopping Kobe when he’s hot.”

“If both players are at their prime, I’d have to go with the ‘Black Mamba,’” said 23-year-old Devaunte James. “Kobe is one of the, if not the best, basketball players ever and that’s no discredit to LeBron at all. Kobe is just such a great shooter. If he gets hot, there’s no stopping him even against ‘King James.’”

For other fans, the decision was not as easy.

“The Kobe vs. LeBron debate is a tough one,” said 19-year-old Wesley Douglas.  “Kobe is good going up against people one-on-one. I think he’s better in that type of environment. But, LeBron is so big and strong that it makes it tough to pick one winner. But if I had to choose, I’d have to say LeBron.”

Some believe that although Bryant is such a great athlete and definitely a contender as one of the best basketball players ever, that won’t be enough to get the edge off of James.

They agree that James is not only an incredible athlete but hands down one of the best basketball players ever and potentially the best NBA player of all time if he stays on the right track.

“I love me some Kobe but there’s no way he’s getting past LeBron James. Especially not when he’s in his groove,” said 23-year-old Chris Johnson. “He is just too big. He has Kobe in both height and size. Yes, Kobe is a better shooter, but he won’t be able to get around LeBron and it will be a huge problem for him defending LeBron. I think it’ll be a tough matchup, but LeBron will most definitely walk away the winner.”

“LeBron is a better individual player,” said 20-year-old Michael James. “Kobe might have the moves and the shooting capabilities, but he won’t be able to do all of that shooting from behind the arc and will certainly have a harder time driving it to the basket with LeBron’s big self up against him. LeBron is pretty big compared to Kobe. He’s closer to Carmelo Anthony’s size and we all know ‘Melo’ usually gives Kobe a hard time on the court. If LeBron and Kobe were both healthy and ready to go, LeBron would come out the winner.”

The decision was pretty close, and as expected people shared different opinions on who they thought would make it out on top between James and Bryant.

It looks like James would be the winner in this matchup.

It was not an easy decision and opinions were mixed.

However, James has proven himself to be a huge asset on the court and one of, if not the best, basketball players ever.

He is a dominant force and would be hard to compete against in a one-on-one matchup.

Despite the outcome, this is a debate that I’m sure we’ll hear about for many more years to come.