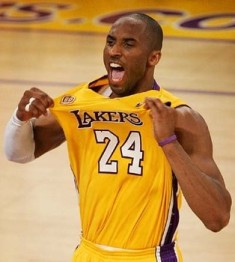 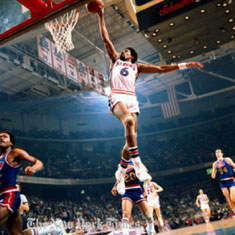 Dr. J vs. the Black Mamba

Every year when basketball season rolls around, questions about who’s the best basketball player of all time always surface.

Excluding the G.O.A.T. (Greatest of all Time) Michael Jordan, the question as to who would win in a one-on-one matchup always intrigues fans? Who could beat who? How players would match up against one another in their prime always comes into question.

While we may never truly know how certain players would stack up against each other, it’s certainly interesting to see what people think about these matchups. So we took it to some fans to see what they thought in order to see who is the best basketball player of all time.

From players like Carmelo Anthony to Kobe Bryant to even older players like Larry Bird, we posed the hypothetical question as to how some fans thought players would play against one another if they were in their prime.

In the first one-on-one matchup, we put Julius Erving up against Kobe Bryant; the Mamba going against Dr. J. The two are great athletes and both have been considered at one point or another as the best basketball player of all time.

“Dr. J had a great career in the league, but he couldn’t compare to Kobe in his prime,” said 20-year-old Michael James. “If you look at stats, Kobe leads him in points, rebounds and assists. Dr. J was probably better at driving to the basket. But as far as shooting, passing and even defense, Kobe would have the edge and beat him.”

Chris Johnson, 23, said, “Putting Kobe up against someone like Julius Erving is tricky. The league back when Julius Erving was at his prime was completely different than what it is today. Comparing the two is very difficult. If I had to pick one, it would have to be Kobe. Kobe is just a better shooter and defender. Besides, if Dr. J played in today’s era there is no telling if he’d put up those same numbers. It’s a tougher era.”

Wesley Douglas, 19, agrees. He thinks Kobe is considered the best basketball player of all time.

“Dr. J had an effect on the league that is unparalleled,” said 25-year-old Juan Gonzalez. “He was a great player, but he’d be no match for Kobe. Just based on pure talent, Kobe is one of the greatest. Nobody is touching Kobe. Just offensively, Kobe is just a better player altogether. He has a better outside shot, better ball handle. Not to mention Kobe also is good at defense.”

“Kobe, Kobe, Kobe without a doubt,” said 23-year-old Devaunte Brown. “There is no comparison. He’s a better scorer and defender and he has a better career when the league is a lot tougher than what it used to be.”

The winner in this matchup is unanimous. Everyone agrees that Kobe is one of the greatest, if not the best basketball player of all time and with ease, the Mamba advances to the next round.