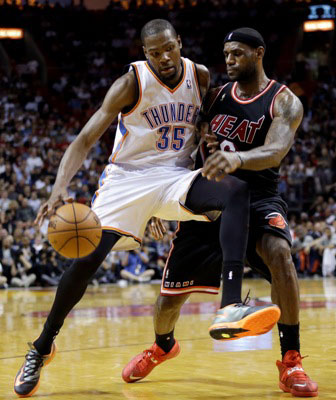 KD vs. The King

In the last matchup in the semifinals, we have Kevin Durant going up against LeBron James in a one-on-one matchup.

Now this matchup has been something many have questioned and debated. Who’s the better player?

Both names are in the mix when you talk about who is the best basketball player ever or who the best NBA player of all time is, but who would actually win if the battle was solely on these two and they went head to head in a game.

It’s one of the most talked about matchups today; James one-on-one with Durant.

Some fans thought the decision was easy and James would be the one taking the win.

“LeBron ‘The King’ James without a doubt,” said 23-year-old Chris Johnson. “He is the best NBA player of all time and probably the best basketball player ever. Scoring wise, defensively, driving it to the basket, LeBron can do it all and I don’t see anyone, even Kevin Durant stopping him.”

“LeBron is the full package and that’s what’s going to give him the win over Kevin Durant if the two ever went at it one-on-one on the court,” said 19-year-old Wesley Douglas. “Stat-wise, LeBron is superior in almost every category. KD might be known as the better scorer but overall, LeBron is the total package and really probably the greatest basketball player ever. He’ll just be a lot for KD to handle.”

“There’s no doubt about it, James would win,” said 23-year-old Devaunte James. “The only place Durant could do better (than) James is scoring. Offensively Durant is great but defensively he won’t be able to matchup with LeBron. LeBron is going to bring it on defense and has the size and strength to beat Durant.”

But not everyone agrees.

Durant might not have any rings just yet, but his force on the court has made him a top contender in the league and a worthy opponent for James.

Some believe it’s Durant that would actually get past James if it was just the two going head to head in a one-on-one battle.

“It would be a close one but I think KD might actually be able to get the edge over LeBron,” said 20-year-old Michael James. “He’s probably the best scorer in the league right now.”

“Kevin Durant,” said 25-year-old Juan Gonzalez. “No one can guard Kevin Durant one-on-one. His height and range makes it nearly impossible for anyone to guard him, even LeBron. Even though LeBron will be hard to guard himself, I think Kevin will ultimately be able to outscore him in the long run.”

There’s no doubt that a matchup between James and Durant would be epic. But it looks like “King James” would be the one advancing in this battle and taking on Kobe Bryant in the finals to see who people think is the best basketball player ever.