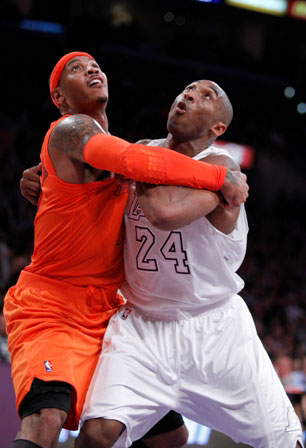 Year after year, so many skilled basketball players bless us all with their talents on the court.

Countless players have been able to make it to the professional level trying to prove they are the best. With so many great names and dominant forces on the court, many question who really is the best basketball player ever.  So we took it to fans to see who they thought would make it out on top.

We took some of the most known figures in the league from both the old school and the new. From players like Magic Johnson to Kevin Durant to Clyde Drexler to Kobe Bryant, we started out with eight players who have at one point in time been considered the best basketball player ever, and put them together in one-on-one battles.

Putting the old school up against the new, only four remain. And is it any surprise they’re all from the new generation of ball.

The final four that remain in the debate about who the best basketball player ever is include LeBron James, Carmelo Anthony, Kevin Durant and Kobe Bryant.

In the semifinal round, our first matchup is Anthony taking on Bryant.

For some fans, the answer was pretty cut and dry. Bryant would be the clear winner in a one-on-one matchup.

“Kobe is the better player,” said 19-year-old Wesley Douglas. “Kobe is arguably the best basketball player ever and ‘Melo’ is great, don’t get me wrong, but he’s no Kobe.

“The two things ‘Melo’ might have over Kobe (are) his size and just how physical he is on the court, but overall offensively Kobe’s the better player. He’s better from midrange, better with the three’s. When Kobe’s hot I don’t think ‘Melo’ would even be able to stop him,” added Douglas.

When you think about the greatest basketball player ever, Bryant’s name is always in the mix. And some thought it was no question he would be able to take on pretty much anyone in a one-on-one game, especially against Anthony.

“Kobe would win it no doubt,” said 20-year-old Michael James. “He’s called the ‘Black Mamba’ for a reason, and playing one-on-one is where Kobe can really do his thing.”

For others, the answer as to who would walk away the winner in a one-on-one matchup was more difficult.

“Seeing Carmelo Anthony and Kobe Bryant go at it would surprisingly be a good matchup,” said 25-year-old Juan Gonzalez. “I don’t think many people would think Carmelo would be able to go toe-to-toe with Kobe, but I do. These two are both great scorers and their stats during the regular season are fairly leveled out. I don’t see one player dominating the other in any real aspect. But if I had to choose, I would say Kobe because defensively he’ll have an edge.

“That would all depend on their status,” said 23-year-old Devaunte Brown. “A healthy Kobe would win a one-on-one game against Carmelo. If Kobe is able to bounce back and get back into his groove then that’s a no brainer. But if he’s still struggling from his injury then ‘Melo’ got this only really out of default.”

Even though Bryant has been in the league longer and has more rings to show than Anthony, there’s no doubt “Melo” is right there in the mix in talks about who could possibly be the greatest basketball player ever. This made the matchup for some fans more interesting.

“I don’t think ‘Melo’ would go down without a fight,” said 23-year-old Chris Johnson. “He’s a physical beast out on the court. He’ll definitely give Kobe a run for his money. But at the end of the day, Kobe would probably walk away from this one. He’s just the greatest.”

It’s no doubt that this one is going to Bryant. The “Black Mamba” lives to see another round.