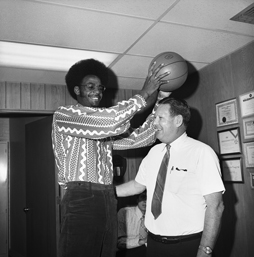 LaRue Martin (left) towers over Coach George Ireland of the Loyola University basketball team in Ireland’s office in Chicago on April 10, 1972.  Martin, 6’10, was the first man chosen in the NBA Draft in New York by the Portland Trailblazers.  Martin averaged over 18 points and 16 rebounds per game for Loyola (Photo Credit: AP Photo/Edward Kitch).

RegalMag.com hates to throw shade at people who at one time were the best in their business.

And although it is time for the 2017 NFL Draft, it is also the best time of the year for basketball with March Madness and the NBA playoffs fast approaching.

With such a mediocre 2016-17 NBA rookie class, RegalMag.com decided to look back at some of the biggest busts in NBA Draft history.  Some were complete duds while others fell victim to the injury bug.

Nevertheless, it is what it is and unfortunately some teams made a draft day blunder multiple times.

Andy Tonkovich (Providence Steam Rollers, 1948; Marshall)—played only 17 games in one season with career averages of 2.6 PPG, 0.6 APG with 26.8 FG percentage