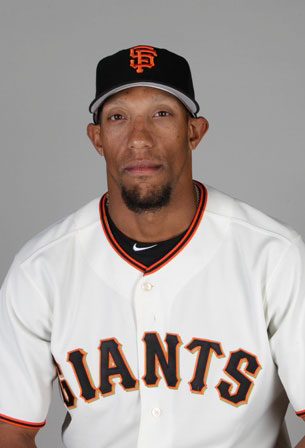 
In Japan, Marc Kroon regularly threw pitches that hit 163 kilometers per hour on Asian baseball radar guns, which equates to 101 miles per hour. He was a highly successful relief pitcher there who turned a one year tryout into a six year career that earned him nearly $20 million.

“I would be secure if I never played again,” Kroon said. “I am here because I love pitching.” Here is the training camp of the World Series Champion San Francisco Giants, a team with all seven relievers returning from a championship squad and at least two other pitchers ahead of him on line for a spot in the AT&T Park home team bullpen.

At 37, Kroon is fighting an uphill battle. He will probably start the season with the Giants’ Pacific Coast League affiliate in Fresno, Calif. Yet, pitchers tend to break down and it would not be shocking to see him in the big leagues this season as an injury replacement if he can still come close to triple digits on American radar guns.

Kroon played for Giants third base coach Tim Flannery in 1994, on the Rancho Cucamonga team that won the California League title. Of his 26 big league appearances, 16 were for current Giants manager Bruce Bochy when Bochy was skipper of the San Diego Padres. The fact that Flannery and Bochy know him and invited him to spring camp is a good sign that the Giants are serious about giving Kroon a real chance.

According to the San Francisco Chronicle, Kroon still would be in Japan had he gotten an offer. The wide belief is he was blackballed because nobody there wants him to reach 200 saves. That is a significant benchmark in Japan, where Shingo Takatsu holds the all-time record of 286.

Teams do not like foreign players – gaijin – to reach such marks.  Reportedly, Kroon offered to play this season in Japan for just $100,000. Despite his effectiveness last year in Asian baseball, he received no offers. Pitching for the Yomiuri Giants, Kroon had an ERA of 1.26 in 46 games and recorded 27 saves. In 50 innings pitched, he recorded 57 strikeouts, clearly an elite performance.

Kroon did not want to leave Asian baseball. On his website he bid farewell to his Japanese fans by saying, “Thank you so much for the support over the past six years. Your support gave me the power to push harder and harder in the six years I played in Japan. I love you and can’t say thank you enough. I still hope someday I will return to Japan either to play or just to visit all of you.”

Kroon also says he is grateful to the San Francisco Giants for signing him. “When others thought I was done you (the SF Giants) gave me a chance.”

The story of a 37-year-old African American flame thrower attempting to convert his success in Asian baseball to a spot on the roster of the reigning World Series Champions will be an interesting journey to follow this spring. Kroon already has a 2009 Yomiuri Giants Japan Series Championship. Adding a 2011 San Francisco Giants World Series ring would be quite the double play.