Rickie Weeks a Hit on Field, in Community 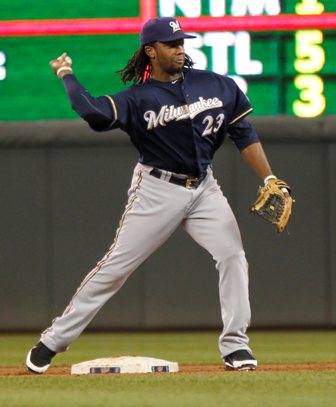 Weeks is enjoying his first all star season with the Milwaukee Brewers (AP Photo/Andy King).

Milwaukee Brewers All Star second baseman Rickie Weeks has adapted to the challenges of playing at baseball’s highest level to become a highly productive player. At the same time he is hitting homeruns for the community by remembering his roots.

Since hitting his stride on the field in 2008, Rickie Weeks has compiled an impressive list of community projects, including the following:

This activity was recognized with Rickie Weeks’s acceptance of the Brewers’ 2010 Michael Harrison award for community service.

Of course, Major League Baseball is a bottom line business, and none of Weeks’ community service would have drawn attention without success on the field.

Rickie Weeks was a college phenom, leaving Southern University in 2003 with a .500 batting average and a series of awards including the Dick Howser Award, the Golden Spikes Award and the Baseball America Award, all for college player of the year.  The Brewers chose Weeks second overall in the 2003 draft and gave him a $3.6 million signing bonus.

Rickie Weeks first came to the majors at the end of the 2003 season, but did not become a regular until 2005. He even returned to the minors in 2007 when a wrist injury contributed to his batting average dipping below .200.

As he recovered from his injury, Weeks greatly reduced a wiggle of his bat that may have caused his bat to slow down as it approached the hitting zone. That adjustment led to a major improvement in Weeks’s performance, a long-term contract from the Brewers, and attention for all his good work in the community.

By 2010, Rickie Weeks led the National League in plate appearances and at bats, slugged 29 homers and scored 112 runs. He also showed his commitment to his team’s success by leading the league in getting hit by pitches, increasing his on base percentage.

The Brewers rewarded this success with a five year deal for $46 million, including an $11.5 vesting option in 2015. Weeks made his first All Star Game this season to round out his all star credentials in the community.

With his brother Jemile off to a great start as a rookie second baseman with the Oakland A’s, Regal is expecting to see two Weeks brothers as all stars on the field and in the community before much more time passes.