Prince Fielder Hoping to Take Brewers to Mountaintop in 2011 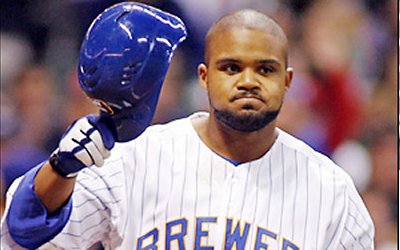 Prince Fielder and the Brewers are tied 2-2 in the NLCS against the St. Louis Cardinals.

The Milwaukee Brewers won 96 games and the National League Central title with a diverse team of homegrown and imported players. Prince Fielder, perhaps their most accomplished homegrown player, has reached the last year of his contract and is eligible for free agency after the World Series.

Fielder’s agent, Scott Boras, is known for aggressively marketing his free agents to the highest bidder with little or no home team discount. Milwaukee is one of the smallest markets in baseball, and the Brewers have already committed large long-term dollars to slugger Ryan Braun and pitcher Zach Greinke, so the chance of Fielder returning to the Brewers is remote.

Prince Fielder himself admitted that in a September interview with Brian Anderson, one of the team’s announcers, when he said, “Unfortunately, this is probably the last year of the one-two punch (of Fielder and Braun). But I think it’s been good, six years, him and me. Hopefully, we can go out with a blast.” After a follow-up, Fielder added: “I’m signed for this year, but being real about it, it is probably the last year.”

With that in mind, this season’s playoff run by Prince Fielder and the Brewers takes on special poignancy and significance. Simply stated, Prince Fielder is the best power hitter in Brewers’ history, and probably the franchise’s best player since Hall of Famer Robin Yount retired after the 1993 season.

In his six full Brewers seasons, Prince Fielder has averaged 38 homeruns, 108 RBIs, and has reached base nearly 40 percent of the time. At this point, according to baseball-reference.com, the most similar career to Fielder’s is Eddie Murray’s, and Murray has a plaque in Cooperstown.

Fielder held up his end of the bargain when the Brewers beat Arizona three games to two in their National League Division Series with a homerun, two doubles, three RBIs and two runs scored in five games. He also homered in game one of the National League Championship Series against St. Louis.

The Brewers have been in one World Series in their history, and they lost that in 1982. Milwaukee won six more games than the Cardinals during the regular season. St. Louis had to use ace Chris Carpenter in game five of its NLDS series to eliminate the Phillies, which means the Brewers might have to face him just once in the NLCS, so the table is set this year in Milwaukee like it rarely has been in the past and may not be for quite a while in the future.

Prince Fielder seemed to sense this when he talked about his pending free agency after being named MVP of this year’s All Star Game, a 5-1 win for the NL, which gives the National League Champion home field advantage in the 2011 World Series.

“Last year, I had no choice but to come back because I had one more year (until eligible for free agency), and it was emotional then in my last at-bat in Milwaukee,” he said. “So it will probably be a little more emotional (this year), but hopefully I don’t have to think about that until I’m holding the World Series trophy.”