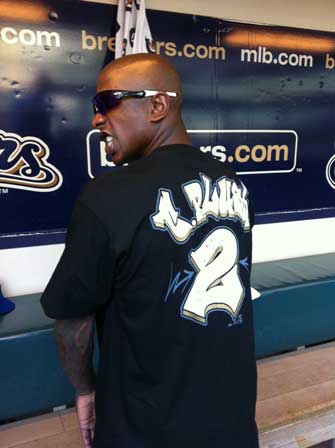 Morgan, and his “T-Plush” persona, has Milwaukee buzzing about their Brewers.

The Milwaukee Brewers’ unexpected run atop the National League Central this season has been powered by the bats of Prince Fielder and Ryan Braun, the arms of Zack Greinke and John Axford, and the irrepressible personality of centerfielder Nyjer Morgan and his alter ego, T-Plush.

The Brewers are in position to win their first division title since 1982. For a small market team to make baseball’s post season a lot has to go right and there have to be some positive surprises. Milwaukee gambled when it acquired the enigmatic Morgan, and so far that gamble is paying off like a winning lottery ticket.

The path Morgan has taken to centerfield in Milwaukee has been, at the very least, unusual. As a teen growing up in the San Francisco Bay Area he played ice hockey as well as baseball and progressed far enough as a defenseman to play major junior hockey in Canada. He could skate, Regina Pats’ general manager Brent Parker told the Calgary Sun, but had just average hockey sense.

“Like everybody else, at some point you’re not good enough to play at an elite level and at that time he just wasn’t good enough,” Parker said.

In the summers he played in Canadian summer baseball leagues, experienced great success and switched to baseball, earned his GED and enrolled at Walla Walla Community College.

His performance there warranted a 33rd round selection by the Pittsburgh Pirates in 2002, eventually making it to the majors in 2007. He went back to the minors in 2008 before returning to the big leagues to stay the next season. Morgan stole a lot of bases, made great plays in the field and frequently called attention to himself. As the regular left fielder he named left field at PNC Park Morgantown, which endeared him to nearby fans in Morgantown, W.Va.

In 2009, the Pirates traded Morgan to Washington. While with the Nationals, Morgan gained national attention for charging the mound, unnecessarily running over a catcher, and getting ejected from games, earning a seven game suspension. Morgan also threw a ball in the stands that hit a fan and regularly clashed with manager Jim Riggleman.

This hardly seemed the profile of a man ready to lead a frequent underdog into contention.  But a trade from Washington to Milwaukee at the end of spring training this year set the stage for just that. At 31, he has established himself in centerfield and as the number two hitter in the Brewers’ regular lineup, with an average comfortably above .300.

His performance has also helped him establish the T-Plush persona that has captured the fans’ imagination in Milwaukee. The “T-PLUSH” jersey t-shirt is the top seller amongst all Brewers gear, and the MORGAN jersey t-shirt is in the top five. According to Morgan’s teammates, the fast-talking, fun-loving T-Plush persona handing out nonsensical nicknames is a big part of why they have a relaxed clubhouse and has translated to success on the field.

“It’s not an act,” veteran Brewers relief pitcher LaTroy Hawkins told Sports Illustrated. “It’s really him. If we weren’t winning, I don’t think it would go over too well. But if it keeps him playing well and running around with a smile on his face we’ll go along.”

If Morgan is outgoing, T-Plush is outrageous. Originally, the nickname came about as part of his patter to come on to the ladies. Now, it is said to be one of the main drivers in a major league team’s pennant push.

As the Brewers try to closeout the Cardinals and the Reds this month, keep an eye on the centerfielder. If it looks like T-Plush is having fun, chances are Milwaukee is heading for a berth in the playoffs and possibly an eventual showdown with the very businesslike Philadelphia Phillies. The contrast will be fun to watch come October.