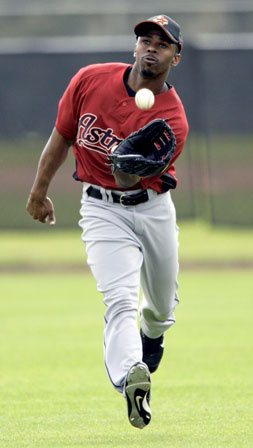 Homegrown All Star Shines for Astros

Sometimes major league players are reluctant to play for their hometown teams. The added pressure of performing in front of friends and family, fulfilling ticket requests, and the complete lack of privacy can make the 162 game grind seem even longer and more difficult. Houston’s Michael Bourn, though, has thrived since his trade to the Astros from the Phillies just before the 2008 season.

Relegated to pinch running duties in his first full season in the majors with the 2007 Phillies, Michael Bourn was acquired by Houston for closer Brad Lidge. While that trade may have won the 2008 World Series for the Phillies, it also provided the Astros with a Gold Glove centerfielder who played in his first All Star game this season.

Bourn’s Houston roots run deep. He graduated from Houston’s Chester Nimitz High School in 2000 and then played four years of varsity baseball for the University of Houston. Athletic teams at both schools are called the Cougars.

At Nimitz he was an All District and All State outfielder while also lettering in basketball and earning recognition as an academic scholar. At the university, Michael Bourn earned All Conference USA honors, was an honorable mention All American, and made several all tournament teams. In the summer before his senior year he led the prestigious Cape Cod League in stolen bases.

Bourn was drafted out of high school in the 19th round by the Astros but decided to pass on pro ball and play at UH. That decision paid off when the Phillies selected Michael Bourn in the fourth round of the 2003 draft. The highlight of his time in the minors was stealing 83 bases in Double A and Triple A in 2005 and 2006. His speed was the deciding factor in Bourn making the Phillies major league roster in 2007.

After a season mostly on the bench in 2007 (only 119 at bats), Bourn got a chance as a regular when he returned home to Houston. The Astros installed him as their regular centerfielder and stayed with him when he struggled to shake off the rust gained in Philadelphia. His .229 batting average in 2008 became .285 last year and is hovering around .270 this year. Bourn won his first Gold Glove Award in 2009 and led the National League in stolen bases with 61.

This year Michael Bourn made his first All Star team for a struggling Astros club that is currently in third place in the NL Central Division with a 70-76 record. He continues to lead the National League in stolen bases and is on pace to just about match last season’s total. Most important, he is coming up big in the Houston community.

Michael Bourn has done some work with The Sunshine Kids, an organization that provides positive group activities and emotional support to young cancer patients and their families. In April, he participated in a pregame meet-and-greet and helped make a few hours of positive memories for families struggling with the daily specter of deadly illness.

Bourn also serves as an ambassador to the Houston Grand Slam for Youth Baseball – a community outreach effort that seeks to foster self-confidence, involvement, teamwork and fun among area children. The organization and the Astros worked together to repair youth baseball fields in the Houston area that were damaged by Hurricane Ike in 2008. Other community work includes appearances for the Make a Wish Foundation, the Houston Urban Youth Academy, and the Astros Fan Fest.

His reward besides the satisfaction of becoming a hometown hero was his selection as the 2009 Astros MVP by the Houston Chapter of the Baseball Writers of America. Michael Bourn has been the brightest light in three dismal seasons of Astros baseball, both on and off the field.