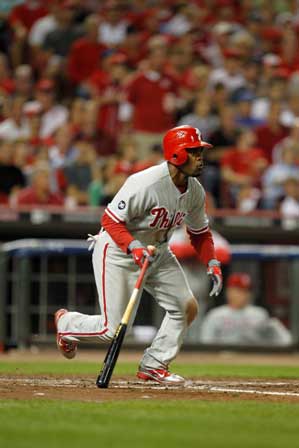 “I think we are the team to beat in the NL East – finally.”

Jimmy Rollins said that before spring training in 2007. This was after the Phillies had finished 12 games back of a Mets team considered a juggernaut in 2006. The experts scoffed, picked the Mets to repeat, and looked solid as New York forged to a seven game lead with 12 games to play in the 2007 season.

As any baseball fan can tell you, the Mets collapsed, the Phillies rallied and all on the last day of the season to pass the Mets. Rollins was subsequently named the 2007 National League Most Valuable player, almost as much for his preseason quote as for his performance on the field.

Now, the Philadelphia Phillies are on the verge of becoming a dynasty. This season marked their fourth consecutive trip to the playoffs, and if they beat the San Francisco Giants in the National League Championship series it will be their third consecutive National League Pennant. And for many, it started with a Jimmy Rollins quote while snow was still on the ground more than four years ago.

All the while, the Mets kept referring to the Jimmy Rollins quote. Carlos Beltran referred to it as the Mets added players hoping to bludgeon the Phillies with their wallets. Never before had one team soared and another collapsed due to the bravado of a team leader. As late as 2009, when the Mets spent more than $65 million to add closer Francisco Rodriguez, he referred to Rollins when he said the Mets would be the team to beat in 2009.

Instead, the Phillies have become the class of the National League, due in no small part to Jimmy Rollins. Along with his 2007 MVP award, Rollins has made three All Star teams, won four Gold Glove Awards as the loop’s best fielding shortstop, and has represented the United States in the 2009 World Baseball Classic. In 2007 he became the first National Leaguer since Willie Mays in 1957 to hit 20 doubles, 20 triples, 20 home runs and steal 20 bases in the same season. He’s also the Phillies leader.

“He’s got intangibles. He’s a character. He’s got personality,” Phillies manager Charlie Manuel said. “He’s a smile. He’s energy. What Jimmy has done, just being Jimmy – our team gets lifted by that.”

“Jimmy brings a lot of fun to the clubhouse,” says second baseman Chase Utley. “You have a good time. You’re relaxed. It’s a personality we need on the team.”

“We know we can win. Watch how we interact with each other,” Rollins said. “The leadership is the same. I’m not going to step on their toes. You take the shade off, and my light starts to shine through.”

Jimmy Rollins is the whole package, on the field and off, for the Philadelphia Phillies. It will be fun to see if he can lead the team to its third straight World Series. Only the pitching rich Giants stand in his way.