Is Dusty Baker Finally Ready to Cook Up a Championship? 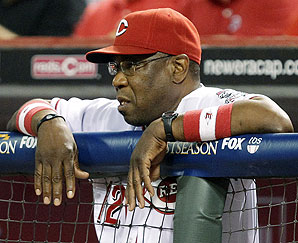 Dusty Baker and the Reds wil face their stiffest National League competition from the Nationals and Pirates (Photo courtesy of SI.com.

Will Dusty Baker Finally Dust Off Shortcomings of the Past?

Dusty Baker has been managing in the major leagues since 1993.

In his first season, he led the San Francisco Giants to the best regular season record in franchise history… and finished second.

He went to the 2002 World Series and watched his Giants blow a five run lead in what would have been the series-deciding game six… and then lose in game seven.

In 2003, he came within one fan interference play of taking the Chicago Cubs to their first World Series since 1945.

Now, despite having his best player (Joey Votto) on the disabled list since July 17, Dusty Baker has his Cincinnati Reds on top in the National League Central and battling the Washington Nationals for the best record in the league.

It will be interesting to see if this will finally be the year that Baker goes all the way and becomes the first African American manager since Cito Gaston with the 1992-1993 Toronto Blue Jays to win the World Series.

According to Baker, the key to his success is the program he runs.

Dusty Baker has had five playoff teams and made the playoffs four times as player.

Baker’s program also helps compensate for losing star players. Votto was given a three-week recovery timetable after undergoing knee surgery on July 17 and Mark Sheldon of MLB.com reports that he “was not wearing a knee brace and looked to be moving around pretty well,” last week. Baker, though, says it will be at least mid-August before his star first baseman can get back on the field.

Votto was having another MVP-caliber season before the surgery and the Reds have played amazingly well in his absence, going 13-3.

So will Dusty Baker finally climb the mountain top and raise the Commissioner’s Trophy in October? The Reds have a lot of the right ingredients in place. They are second to Washington in team ERA despite playing home games in a very hitter-friendly ballpark, closer Aroldis Chapman sometimes hits 105 MPH on the radar gun, and no one in their five-man starting rotation has missed a start this season. Second baseman Brandon Phillips is having perhaps the second-best season in his career while Jay Bruce and Scott Rolen have delivered power with Votto and in his absence.

The Reds will do well to continue to create distance between themselves and the Pittsburgh Pirates. Yes, there is the cushion of two wild cards for teams that do not finish first, but this year the non-division winners must square off in a one-game elimination showdown before advancing to the division series, and no team wants to risk their season on a one game crapshoot.

Given the inferior depth in the National League, the youth of Washington’s star players, the planned shutdown of Nationals’ ace Stephen Strasburg, and the likely fade of Cincinnati’s intra-division rivals, Regal sees the Reds as a good bet to represent the NL in the World Series and perhaps bring Dusty Baker his first title in the manager’s office and a ring to match the one he won in 1981 when he played left field for the Los Angeles Dodgers.