Decline of Ryan Howard Possibly a Microcosm of Phillies Downfall 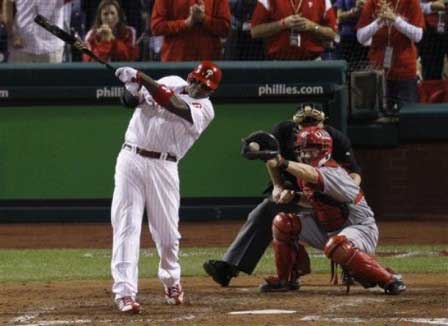 Phillies Star on a Mission: World Series or Bust

The 2010 season ended for Ryan Howard and the Phillies when the big slugger took a ninth-inning called third strike from San Francisco Giants closer Brian Wilson with two on and two out in Game Six of the NLCS. Suddenly, the Phillies’ two year reign as National League Champions was over, and the team anointed as baseball’s best would have to watch the World Series from home.

Because of that final strikeout, Ryan Howard took the lion’s share of the blame for his team’s failure to win the pennant. Dan Parzych of yardbarker.com perhaps put it best when he wrote, “Honestly, how Howard failed to even swing at the final pitch will be one of the most frustrating topics for Phillies fans to discuss. It’s hard to place the blame on just one player considering how the entire Phillies’ offense struggled during the postseason—but it’s hard not to put most of the blame on Howard considering how much money Philadelphia’s paying him just to whiff at the ball.”

Howard signed a five year, $125 million contract with the Phillies before the 2010 season. By the standards of what top major league players make, his contract was well deserved. Ryan Howard was 2006 National League Rookie of the Year, 2007 MVP, and reached the 250 homerun mark in just 855 games, the fewest games to that level in major league history. He also holds Phillies records for most career grand slams with nine and most homeruns in a single season with 58.

Unfortunately, baseball is a game often defined by failure and shortcomings and Ryan Howard is leaving a trail of those as well. As a left-handed hitter he has shown vulnerability against left handed pitching. When facing a lefty, Howard loses about 70 points in batting average and his slugging average drops to .438 compared to .623 against right-handers. Basically, he goes from a Hall of Fame caliber hitter to someone a bit below average.

This allows opposing managers to match their left –handed relief pitchers against Ryan Howard in the late innings, which decreases his value. It also shows in his late-inning performance. Howard does not even hit .240 from the seventh to the ninth innings, and his power almost disappears after the seventh inning.

Like a lot of big players, at 6-4 and at least 240 pounds, Ryan Howard is not aging well. In the two seasons since turning 30, Howard has averaged 32 homers and 112 RBIs. During his 20s, a typical Howard full season featured about 49 homers and 143 RBIs. With the exception of the steroid era, improvements in power statistics once a downhill trend has been established are very rare.

This is the fifth straight year the Phillies have qualified for postseason play with the same core of players. Howard and his mates are entering their baseball dotage, which adds to the importance of this year’s result. If the Phillies win it all this year they will be celebrated as one of baseball’s great non-Yankee dynasties. There is a lot on the line in Philadelphia this year, and it will be interesting to see how Ryan Howard and the rest of his club respond to the challenge.