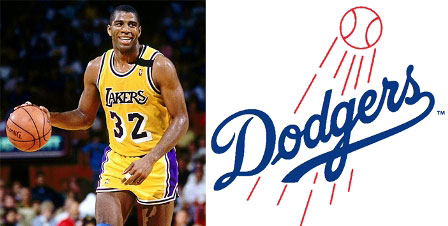 Former Laker great Magic Johnson is attempting to buy the Dodgers and join the club of Major League Baseball owners.

Showtime on the Diamond? Magic a Candidate to Buy Dodgers

Magic Johnson is a candidate to become one of the Major League Baseball owners. The Los Angeles Dodgers will be auctioned off this winter as part of the Frank McCourt divorce settlement sweepstakes, and Johnson is fronting a group that includes prominent Southern California businessmen and Stan Kasten, the former president of the Atlanta Braves, Atlanta Hawks and Washington Nationals.

Johnson would be the first African American controlling owner of a Major League Baseball franchise. The fact that it is one of baseball’s cornerstone franchises and the franchise with which Jackie Robinson made his debut makes it all the more special. Johnson’s prospects are unclear at this point. Others who are reviewing the Dodgers’ books and are in line to make bids include Dallas Mavericks owner Mark Cuban, former Dodgers owner Peter O’Malley, and a group fronted by former Dodger stars Orel Hershiser and Steve Garvey.

The question for Regal and its readers is; what impact will Johnson’s ownership have on Black baseball players and Blacks in the front office of the Dodgers and other MLB teams? Will an African American owner raise the profile of Blacks in baseball and create more opportunities on and off the field?

It’s hard to imagine an immediate on-field impact. As with other professional sports, the competition in baseball is fierce and any player nearly ready for the Major Leagues has been identified, scouted and his strengths and weaknesses are well known. Young athletes might be more inclined to pursue baseball if a high-profile Black like Magic is running a team in the country’s second largest media market. So perhaps a few eight year olds will be influenced by Magic to put away their Air Jordans or shoulder pads and pick up a bat and glove. If so, that impact is at least a decade away.

The front office is a different story. Magic has a long history of championing the Black community in his post-basketball career ventures. When he opened a movie theatre in South Central Los Angeles he invited gang leaders to a meeting where he shared his plans.

“I just laid it out to them that I’m building this theater for the community,” Johnson recalled. “You can’t have anything happen at this theater because we’re going to hire your cousins, your mothers, your sons and daughters. You come in here and shoot up the place; it might be your own relatives inside.” Johnson’s system has worked. There has been very little violence at the theatres and his business holdings (which also include restaurants and shopping centers) were estimated at $700 million in 2008.

If Johnson takes a similar tact as Dodgers owner there will be a much greater African American presence in the team’s front office. According to the team’s 2011 yearbook, the highest ranking Black aside from ceremonial Special Advisor Don Newcombe is Assistant General Manager Dejon Watson. Watson is the only African American in the Dodger front office who is not a former player. That could change if Johnson is one of the Major League Baseball owners. His influence could also spread to other teams within MLB.

Johnson told the Los Angeles Times his business and social philosophy is simple, “What I’m trying to do [is] leave a legacy for . . . minority people.”

If Johnson is successful in his bid for the Dodgers it would appear that there will be a lot more Black faces at Dodger Stadium. Regal hopes his influence would then spread to other Major League Baseball owners.