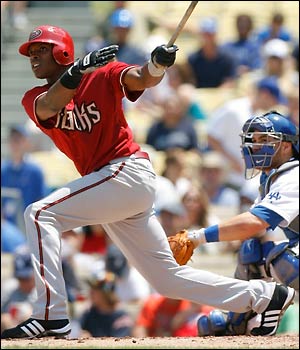 Upton is living up to the hype that made him the overall top pick in the 2005 MLB draft.

Dethroning the defending World Champions is never easy. Defending champions are proven winners with a lot of pride and often loaded with players who have come through under the most intense pressure. Yet, with just a few games left in the 2011 baseball season, the Arizona Diamondbacks are on the verge of doing just that to the San Francisco Giants, largely on the strength of the season put together by emerging young star Justin Upton.

For most of this season Upton has led the National League in runs scored and doubles, has hit close to .300, and will likely wind up with more than 30 homeruns. He made the NL All Star team for the second time and at age 24 has become the offensive fulcrum of his club at an age when most players are still in Double A working their way to the majors.

“This kid busts his tail,” Arizona manager Kirk Gibson said of Upton. “He works as hard as anyone.”

That hard work has paid off in good health. He has already exceeded his career high in games played, at bats, and every other major offensive statistic. Twice Justin Upton has missed significant time with oblique injuries, and with that problem now under control his talent has been free to come to the surface.

That Justin Upton is talented has never been a question. He was the number one pick in the country by the Diamondbacks in 2005 and made his major league debut at age 19 in 2007. He and is brother B.J., an outfielder with the Tampa Bay Rays, are the only brothers in major league history to be drafted among the top two players in two separate major league drafts. B.J. was drafted in 2002.

After receiving a $6.1 million bonus from the Diamondbacks in January of 2006, Justin Upton rocked through the minor leagues. He hit .319 with 18 homeruns in just 103 games at Single A and Double A in 2007 before debuting in the majors on Aug. 2. By 2009 he was an All Star and earlier this year signed a six year deal worth more than $50 million.

Teammate Chris Young is confident that Justin Upton will continue to produce for the Diamondbacks despite the fact that his financial future is secure. “J-Up takes care of his business the right way and he’s going to continue to bust it every day,” Young said.

“He’s not going to let up at all. He’s going to continue to come with it. His main goal is winning. I don’t think he’s a guy that’s all about ‘I, I, I.’ He’s more of a team player.

“He’s not driven by money in no kind of way,” Young said. “It’s part of the game, but by no means is that why he wants to be great in this game. I think the main focus is just winning and him trying to do his part to help the team.”

One byproduct of Justin Upton’s success and the Diamondbacks’ position atop the NL West standings is that the young star also leads the National League in being hit by 17 pitches. So far, he has not charged the mound, and for that Diamondback president Derrick Hall is grateful.

“I am proud of Justin for not (retaliating),” Hall said. “We certainly do not need any suspensions right now. I like how we keep our focus and continue to retaliate with the bat and the final score.”

And if the Diamondbacks maintain that focus for the rest of September they should find themselves facing the Milwaukee Brewers, Atlanta Braves or Philadelphia Phillies in the NL Division Series come October. If and when that happens, Justin Upton’s talents will find the national stage that is so richly deserved.