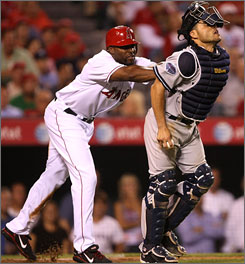 From 2004 to 2009, the Los Angeles Angels of Anaheim were the West Coast’s answer to the New York Yankees and Boston Red Sox in the battle for excellence in the American League.

During that period, the Angels won five American League Western Division championships, averaged nearly 95 wins per season, went to the League Championship series in 2005 and never finished lower than second place. In addition, the Angels won the 2002 World Series as the Wild Card team with 99 regular season wins.

Things were so good in Anaheim that owner Arte Moreno signed manager Mike Scioscia to a 10-year contract extension in 2009. The Los Angeles Angels of Anaheim seemed to have a formula.

They would aggressively run the bases, hit for a high average, emphasize defensive excellence, disdain walks, pitch well and dominate teams within their division. That formula seemed flawless until the team invested heavily in veteran outfielders Vernon Wells and Torii Hunter, and nothing has since been the same.

Few things will kill a baseball team more quickly than having extraordinarily expensive veteran players in the middle of the lineup every day that are significantly underperforming.

Hunter has regressed from an All Star to an average player with the Los Angeles Angels of Anaheim, while Wells has become a total albatross with a lot of years and a lot of money left on his contract.

The Hunter decline at age 36 has been easier to understand. Defensively, age and the emergence of Peter Bourjos in 2010 have forced a move from centerfield to rightfield, and he has stopped winning Gold Glove Awards.

According to baseball-reference.com he has become a below-average outfielder in terms of range. With the bat, Hunter now hits closer to .250 than .300 with decreasing power. He is also on pace to strike out more this season than he has in any other season in his career.

For this performance, the Los Angeles Angels of Anaheim will pay him $18.5 million this season and $18 million in each of the next two seasons.

Compared to Wells, though, Hunter is performing like a Hall of Famer. It is not a stretch to say that Wells has delivered minor league results for the Los Angeles Angels of Anaheim while pulling down superstar money.

The former Blue Jays All Star has struggled to hit .200 for the Los Angeles Angels of Anaheim in about 400 at bats. His on-base percentage is about 100 points below the major league average. He has already struck out more often this season than in any year in his career, and he has slowed down noticeably in the outfield.

Baseball-reference says he is now a poor leftfielder after years as a very good centerfielder. At 32, it seems unlikely he will be able to reverse this decline.

So what are the Angels paying him for a performance far below what freely available minor league talent would deliver for a league minimum salary? Hold onto your hats, baseball fans.

In addition to pulling down $23 million this season, Wells is owed $21 million per season through 2014. This deal almost makes Barry Zito’s Giants contract look like a bargain. It is a near cinch that the Los Angeles Angels of Anaheim will have to release Wells by 2013 and eat the last two years of his deal.

What are the consequences to the Angels? Paying Wells and Hunter nearly $40 million per year makes it more difficult for them to add key players they might need to challenge the Texas Rangers, who have taken control of the American League West since the Angels’ blunder with Hunter and Wells.

The Angels are also wasting the prime years of starting pitchers Jered Weaver, Dan Haren and Ervin Santana. Having three number-one type starters at the same time is rare, and given the fragile nature of pitching it is an attribute not to be taken for granted.

Most of all, by overpaying Hunter and Wells during the decline phase of their careers, the Los Angeles Angels of Anaheim have surrendered their competitive edge in the American League West, probably for several years.

Texas is now the team to beat out west, and the only worthy AL challenger to the continuing excellence of the Yankees and Red Sox.