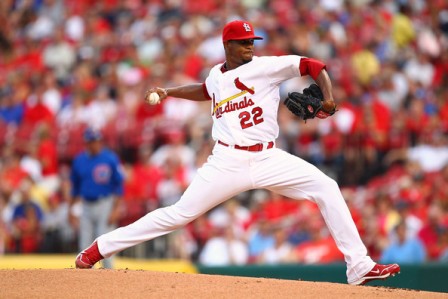 Edwin Jackson is eager to prove the doubters wrong during the World Series.

In that game he pitched six scoreless innings for the Dodgers and beat Randy Johnson 1-0.  He pitched in three more games that season, finishing with a 2-2 record and a 2.45 ERA and the Dodgers thought they had an ace in the making. Jackson’s 96-MPH fastball excited them even more.

The next two seasons, though, he posted ERAs of 7.30 and 6.30, spent time in the minors and was traded to Tampa Bay. That began an enigmatic pattern for Jackson when the only thing consistent about him was his inconsistency. He had very good years; very poor years, spent more time in the minors, and had four teams after the Dodgers give up on him.

He threw a 167-pitch no hitter for Arizona in 2010 and was traded to the White Sox less than six weeks later. He was in Tampa Bay’s rotation in 2008 when the Rays made the World Series, but was removed from the roster for the Division Series because of a cold September before pitching just four innings in the Championship Series and World Series.

By spring training he had been traded to Detroit. With the Tigers he had a hot first half and made the 2009 American League All Star team but faltered in the second half, which led to a trade to the Diamondbacks.

The up-and-down pattern continued this season. He was a .500 pitcher for the White Sox with an ERA of about 4.00 before the Cardinals acquired him in July. He pitched well in St. Louis, going 5-2 and helping the Cards overcome a 10-game deficit to catch and pass Atlanta for the National League Wild Card. He then earned a win against Philadelphia in the Division Series with six innings of five hit, two run ball.

This led the Cardinals to entrust him with the clinching game six of the NLCS in Milwaukee last Sunday, where he laid an egg. Jackson lasted just two innings, surrendering four runs including three homers. Fortunately, the Brewers pitchers were worse and the Cardinals advanced to the World Series despite Jackson’s performance.

The question now for the Cardinals is, “Which Edwin Jackson will show up for the World Series?” Will it be the kid two years out of high school who beat Randy Johnson or the career .500 pitcher who seems to spend large chunks of many games backing up third base?

The question for Jackson himself is more personal and possibly more rewarding. He now has the six years of service time required for free agency and no contract for next year. His agent is Scott Boras, famous for taking no prisoners in negotiations. Jackson earned nearly $9 million this year and could be in line for a long-term, huge-dollar contract from a team tantalized by his potential that also believes it can tame his inconsistency.

Jackson has no home in baseball. He has played for five other teams since his memorable beginning in Los Angeles. This will take sentiment out of any negotiations and allow Boras and Jackson to concentrate on the bottom line.

Perhaps no one has more at stake in the 2011 World Series than Edwin Jackson. Two great starts will have suitors lining up around the block by Thanksgiving, especially since baseball’s biggest spenders in New York and Boston need starting pitchers. A mediocre performance in the Fall Classic will put a damper on that.

Yes, the 2011 World Series is Edwin Jackson’s chance to stick it to the man and perhaps find a long-term home in the major leagues. It will be fascinating to see which version of this talented pitcher takes the mound for the Cardinals between now and Oct. 27.