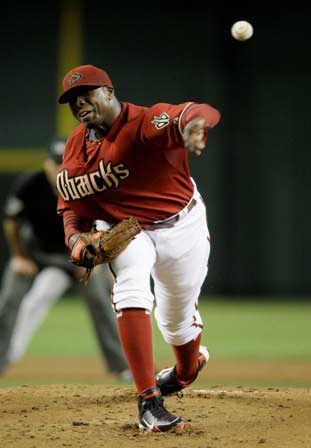 Why Did the D-Train Fall Off the Rails?

Dontrelle Willis took the big leagues by storm when he arrived with the Florida Marlins in 2003. He went 14-6, threw two shutouts, was voted National League Rookie of the Year, and helped the Marlins upset the Yankees in the World Series.

Two years later his record was 22-10, his ERA was 2.63, he led the National League with seven complete games and five shutouts, and finished a close second to Chris Carpenter in the Cy Young Award voting. As a 6-4, 235 pound left-handed pitcher, he seemed like a valuable commodity for years. The Detroit Tigers certainly thought so in 2007 when they traded six players for him and agreed to pay Willis $30 million for the next four seasons.

As soon as the D-Train put on the Tigers’ famous uniform with the Old-English D, his career fell off the rails. Willis injured a knee, developed an anxiety disorder and won only two games for the Tigers in a little more than two seasons. He spent about half that time on the disabled list or in the minor leagues, all while drawing his full salary. By all accounts Willis gave the Tigers everything he had but nothing worked.

“It never worked out the way we would’ve liked it to work out,” team president/general manager Dave Dombrowski said. “I don’t think I really need to say any more than that. At the time, we thought we were getting a guy who would come in and be a very solid big league pitcher, and it didn’t work out for us. Those things happen at times.  You’re never happy when they do. He’s put forward the effort. We know we’ve dealt with a lot of issues with him. It’s unfortunate.

“It’s difficult,” Dombrowski said. “For us and for me, because we had a meeting with the staff members today, it’s difficult, because he’s worked hard to try to overcome a lot. He’s made some strides.”

The bottom line is that baseball is a results-oriented business and Dontrelle Willis did not deliver results in Detroit. Still, the Arizona Diamondbacks, the team with the worst pitching in the National League most of this season, saw enough to sign Willis and give him a big league trial. Arizona sent Detroit a second-line pitcher while the Tigers were on the hook for almost all of this year’s $12 million salary.

That nearly free trial lasted seven weeks. Dontrelle Willis recorded a shaky five inning win in his first start for Arizona but went downhill after that. In six games (five starts) he put up a 1-1 record, a 6.85 ERA while surrendering 24 hits and 27 walks in 22 innings before his release on July 6.

“We gave him this opportunity in an effort to try to resurrect him, to give him opportunity, and just catch lightning in a bottle,” DiPoto said. “After just talking to him, it didn’t particularly work this time around. Dontrelle is a wonderful human being. He works particularly hard, brings a lot of energy to a club and for that reason it was a little bit of a difficult decision.”

While some called for Willis to give up pitching and try to follow the Rick Ankiel path and make it back to the big leagues as an outfielder, the San Francisco Giants saw enough to offer Dontrelle Willis a minor league deal as a pitcher. The Giants have a strong recent track record of developing young pitching with Tim Lincecum (two Cy Young Awards), Matt Cain, Jonathan Sanchez, Madison Bumgarner and Brian Wilson coming up through the organization to succeed in the big leagues.

Dontrelle Willis is a graduate of Encinal High School in Alameda, Calif., about 20 miles from AT&T Park, so in a sense he is coming home.

The Giants say they will assign former big league pitcher and current player development VP Dick Tidrow to Dontrelle Willis with the idea of rebuilding his delivery and taking advantage of what everyone agrees is still a strong arm.

“You’ve got an arm like that, you get him in our system the way we prepare our pitchers and maybe he’ll have some success,” Giants exec Bobby Evans said. “We’ll do some things to try to help him. He’s already accomplished a lot. You never know.”

According to the San Francisco Chronicle, Dontrelle Willis did not knock on the Giants’ door seeking a job with his (sort-of) hometown team. GM Brian Sabean asked Evans to reach out to Willis. Evans spoke to him personally and found “he has the right attitude. I think he’s driven to succeed. We hope that translates.”

San Francisco may well be the last stop for the D-Train, regardless how this experiment turns out. The big money contract he signed before the 2006 season expires at the end of this year. Dontrelle Willis is now with an organization that is renowned for its ability to develop pitchers. Other teams may conclude that if the Giants can’t fix him nobody can. If it is the end of the line, at least Dontrelle Willis has earned $40 million in salaries from baseball and should be set for life.