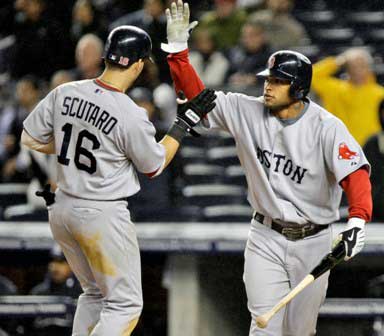 McDonald (right) is earning the respect of teammates like Marco Scutaro with his rags to riches story (Frank Franklin II/AP).

As spring training ended in April, it appeared that outfielder Darnell McDonald was facing another season of minor league life.

Cut by the Boston Red Sox, who were loaded with outfielders owning guaranteed contracts, McDonald, 31, was on his way to Pawtucket, R.I. for another six months of pre-dawn wakeup calls, insufficient meal money and subsistence-level compensation. He had brief shots in the majors with the Orioles, Twins, and Reds and had failed to impress. At the end of the day it appeared that Darnell McDonald was another player in his early 30s who could do very well in the high minors but did not do enough to stick as a major leaguer.

He was not quite fast enough to cover centerfield on a regular basis, he did not have quite enough power to demand regular playing time in left or right field, he cannot play the infield, and he did not reach base quite often enough to be seen as a credible pinch hitter. In short, it appeared that he was one of the best baseball players in the country, just not one of the 700 best with the talent, drive and luck to stick in the major leagues.

That began to change on April 20. On that date the Red Sox put outfielders Jacoby Ellsbury and Mike Cameron on the disabled list and called up McDonald. That very night against the Texas Rangers at Fenway Park, McDonald hit a game tying two-run pinch homer in the eighth inning and then drove in the winning run with a single in the bottom of the ninth as Boston won 7-6.

“Well, I got on the plane and was sitting around [waiting],” McDonald remembered in a conversation with Ian Browne of MLB.com. “I came to the field, pretty much put my uniform on and got ready for the game. I couldn’t write a script any better than this. A lot happened real quick tonight. It was a dream come true. That’s the reason I signed over here, to play in this type of atmosphere, to play for an organization like this.”

The Red Sox liked what they saw from McDonald in spring training and felt that, at some point, he might help them against left-handed pitching.

“Darnell McDonald is a great kid,” Manager Terry Francona said. “Again, early in spring training, he was hurt and he wasn’t able to play, so he had to go back to the Minor League complex and do his rehab. You give him that speech: ‘Go to Triple-A, play well and we’ll call you up.’ That’s what he did. And he impacts the first game he plays with us and helps us win.”

According to the Elias Sports Bureau, McDonald is the first Red Sox player to end a game with an RBI hit in his debut with the team since RBIs were first kept as a stat in 1920. And by clocking a home run in his first plate appearance, McDonald became the first Boston hitter to do that since Orlando Cabrera on Aug. 1, 2004.

Darnell McDonald has remained a steady contributor since his magical first night. Through June 28 he has hit .271 with five homers and a .410 slugging percentage in 166 at bats, all respectable major league numbers. Yet, despite his contribution, his future with the Red Sox is anything but assured. He is out of minor league options, which means Boston would have to put him on waivers if they decide to cut him and another organization might grab him. Even worse, he could return to the minor leagues

The problem is that Darnell McDonald cannot play second base or shortstop. With a glut of corner infielders and designated hitters on the roster, the Red Sox need their fifth outfielder to be able to play the infield, too. Bill Hall, another Boston reserve, might not be the most elegant infielder – but he at least is an infielder. If either Dustin Pedroia or Marco Scutaro turns an ankle in a game, Hall is an adequate fill-in. Darnell McDonald is not. Unless the Red Sox free up roster space with another move, the Red Sox might have no choice but to let McDonald walk away.

A decade in the minors will create a lot of short-term thinking. For Darnell McDonald, 2010 has been a dream from which he is not anxious to awaken.