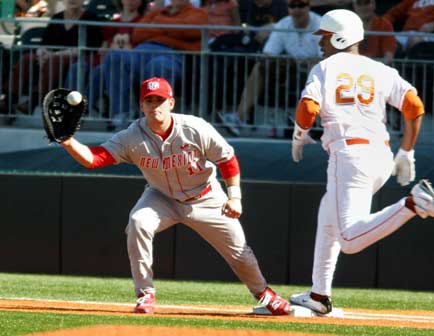 There have been several published reports, including one in Regal Magazine, decrying the lack of participation of African Americans in baseball, including collegiate baseball. Theories include the expense of the sport, the space it takes, and that its slower nature does not appeal to young, urban Blacks.

This year, 20-year-old African American Jason Heyward has made a big splash with the Atlanta Braves and is the early leader for National League Rookie of the Year honors. Heyward grew up in Georgia and played in advanced travel leagues since elementary school.

At the college level, five of the eight top teams heading into the NCAA Collegiate Baseball Playoffs and College World Series sport key African American players who will have a lot to say about which team takes home the big trophy, and earns a bit of bling for their ring fingers. Perhaps we are on the cusp of a resurgence of African Americans in the national pastime.

Kevin Keyes, Junior Outfielder, University of Texas: Keyes holds down an outfield spot for the number one ranked team in the nation. He was an All Big 12 Honorable Mention selection last season. This year he is hitting .313 with a .540 slugging percentage and will be a key producer if the Longhorns make it to Omaha.

Branden Keene, Freshman Pitcher, University of Virginia: Keene was a sixth round draft pick of the Boston Red Sox out of high school and has lived up to that billing with the Cavaliers. He is 4-0 with a 3.06 ERA and has held opposing hitters to a .219 batting average. The young right hander was the 2009 Maryland High School Player of the Year.

Rico Noel, Junior Outfielder, Coastal Carolina University: Noel led the Big South Conference and tied for the top spot in the country last year with 48 steals. This year he is hitting .349 and has 50 stolen bases. He was named the Big South’s Preseason Player of the Year, and was named a Third Team Preseason All-American by Ping! Baseball in 2010.

Christian Colon, Junior Shortstop, California State University, Fullerton: Colon was captain of the 2009 Collegiate Baseball National Team and was a second-team All American as a sophomore. He led Team USA in hits, homeruns, RBIs, runs, slugging, and stolen bases. This year he leads the Titans with 14 homers, has put up a .345 batting average and has started every game for the perennial Big West power.

Jackie Bradley, Jr., Sophomore Outfielder, University of South Carolina: Bradley was a consensus 2009 Freshman All America choice by Baseball America and Collegiate Baseball.  This year he leads the Gamecocks with a .368 batting average and is second on the team with nine homers and 43 RBIs. He was an All State player in Virginia.

The College World Series begins June 19 at Rosenblatt Stadium in Omaha, Nebraska. It will be shown live on various ESPN outlets.