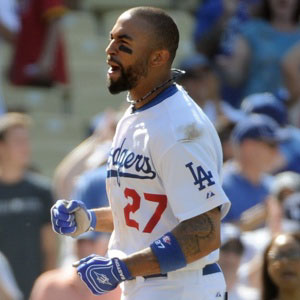 Dodgers outfielder Matt Kemp has solidified himself as the best baseball player this season.

Should Our Community Support Baseball Based on Success of Kemp and MLB Outreach?

Going back to the days of Jack Johnson, Joe Louis and Jackie Robinson, through Jim Brown, Michael Jordan and Kobe Bryant, the African American community has a history of enthusiastically supporting just about any sport when we’ve had the best player.

Discounting the steroid-tainted and disagreeable Barry Bonds, for the first time in at least a generation the consensus best baseball player, Los Angeles Dodgers centerfielder Matt Kemp, is Black. Kemp was flirting with a .400 batting average 30 games into the season, and remains among major league leaders in homeruns and RBIs. He plays a Gold Glove level centerfield, delivers in the clutch, and comes across as personable and hardworking.

What does that mean to our community? Should Blacks provide Major League Baseball greater support with one of our own looking like the game’s standard bearer for the next several years? Should MLB reach out to the Black community with greater interest…or is MLB already doing a lot and perhaps its efforts deserve more of our attention?

The RBI program is basically youth baseball in areas that may be underserved by Little League. There are 200 RBI programs worldwide serving nearly a quarter million players from ages 5-18. There is also an educational component that promotes school attendance and success. RBI alumni include former National League MVP Jimmy Rollins and ace pitcher C.C. Sabathia. The next best baseball player might be an RBI alum.

The Jackie Robinson Day festivities include every player in every game donning Robinson’s retired number 42 and pregame observances in select parks. The Dodgers, the franchise for which Robinson played, usually does something bigger as do the Mets since Robinson’s big league debut was in Brooklyn and Citi Field in Queens is the closest big league stadium to where Ebbets Field once stood.

The Civil Rights game began in 2007. Two major league teams square off in a regular season game with pregame ceremonies designed to celebrate the Civil Rights Movement. Some years have featured special uniforms for the teams involved, and prominent African Americans from all walks of life attend and are celebrated. This year’s game will take place on Aug. 19 when the Atlanta Braves will host Kemp and his Dodgers teammates. The last three Civil Rights Games have sold out.

The Urban Youth Academy program is a series of facilities near urban centers that feature full sized diamonds plus fields for t-ball and softball. The New Orleans facility will be the first to have a full-service stadium. A facility in Philadelphia is planned while South Florida and the San Francisco Bay Area are candidates for future sites. Mentorship programs are also in place for secondary school and beyond students.

It seems that MLB is making a good faith effort to connect with our community. Amateur baseball is expensive for families with $200+ bats, $100+ gloves and $50+ shoes. There are also density issues in urban areas that sports like basketball don’t face. Still, baseball’s heritage in the African American experience runs deep. All of us can remember older family members taking us to see or telling us stories about Willie Mays, Hank Aaron or Ernie Banks when they were the best baseball player. Perhaps it is time to welcome baseball back as part of our culture, support youth leagues and attend professional games.

Players like Kemp, Rollins and Sabathia deserve our attention.