Top Pitchers of All Time: The Minority Report 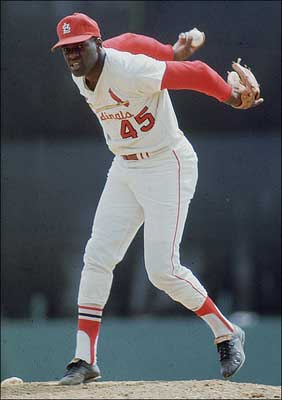 Bob Gibson is still feared and revered as one of the top pitchers of all time (Photo courtesy of bleacherreport.com).

Masters of the Mound

When Major League Baseball became integrated in 1947, Black pitchers began their legacy. However, there were too few Black pitchers early on and even fewer great ones.

But as the years went on, Blacks pitchers made a great impact and a few became some of the top pitchers of all time.

On this list of the top pitchers of all time, two are active and three are in the Baseball Hall of Fame.

Unfortunately, there are no 300-game winners or a perfect game thrown by a Black pitcher.

Of the 277 no-hitters thrown in baseball history, only 10 have been by Black pitchers. CC Sabathia, who is on a torrid pace with the New York Yankees could be the first Black 300-game winner when he retires.

Regal Magazine takes a look at the 10 top pitchers of all time among players of color.

There are two reasons to name Gibson as one of the top pitchers of all time. One is that he is, and two is you would be afraid to not say he was because he might kill you. In his 17 years in the major leagues, all with the St. Louis Cardinals, Gibson was one of the greatest and most feared pitchers in the game.

Gibson was so ornery that the “Brushback King” even threw a brushback pitch at fellow Hall of Famer Reggie Jackson in an Old-Timers Game in 1993. It was Gibson’s way of payback for when Jackson hit a home run off of him the year before.

But don’t let that fool you. Gibson was all control, hitting just 102 batters in his career. He still holds the record for lowest ERA at 1.12 set in 1968, and records for strikeouts during a World Series with 35 and 17 strikeouts in a World Series game.

Marichal was the first Black pitcher to throw a no-hitter in the National League in 1963, and won more games than any other Major League pitcher in the 1960’s with 191, but never won a Cy Young Award. He also ranks as one of the top 20 pitchers of all time with a strikeout-to-walk ratio of 3.25 to one.

Nine times Marichal led the league in fewest walks per nine innings and had a total of just 709 in his career.

But Marichal may always be remembered for the incident involving himself and the Los Angeles Dodgers’ Johnny Roseboro in 1965. Marichal was at bat against Sandy Koufax with Roseboro behind the plate. In a heated exchange, Roseboro made the mistake of taking off his catcher’s mask as Marichal hit him with his bat several times and Roseboro needed 14 stitches. Marichal was fined $1,750 and suspended for nine days.

Martinez has the second highest winning percentage in modern baseball history just behind the great Whitey Ford, and one of the best ERA’s in history for a starting pitcher. Martinez was known for dominating with a variety of pitches, which included a fastball, cutter, curveball and circle changeup.

He struck out 200 or more batters from 1996-2005 leading the league three times. In 1999, Martinez became the first pitcher to start the All-Star Game and strike out the first four batters he faced.

He was on the Red Sox team that ended 86 years of misery and whining by winning the World Series in 2004. Martinez is one of eight pitchers with three or more Cy Young Awards. Sports Illustrated named Martinez to its MLB All-Decade Team in 2009.

Rivera is the only relief pitcher on the list of top pitchers of all time, and the most dominant of all time. Rivera has as much to do with the Yankees’ success in the regular and postseason as any other player in team history.

Rivera dominates with just one pitch – a 90-plus mile per hour cut fastball that has been called an all-time great pitch. Rivera is also the only reliever in history to win the League Championship Series and World Series MVP awards. Rivera is the second active player on this list, but that is in question.

He suffered a freak injury where he twisted his right knee and tore his ACL in May 2012, missing the rest of the current season. When Rivera retires there’s no doubt that he will be known as one of the top pitchers of all time and a first ballot Hall of Famer.

After making his debut with the Mets at19 and going 17-9 with a 2.60 ERA and 276 strikeouts in 1984, everyone thought Gooden would be regarded as one of the top pitchers of all time.

His years with the Mets were stunning. The next year Gooden led the league in wins with 24 (with just four losses), a staggering 1.53 ERA, 16 complete games, 276.2 innings pitched and 268 strikeouts, winning the Cy Young Award.

Gooden’s dominance continued in 1986 striking out 200 and posting a 17-6 record in leading the Mets to a World Series title. Gooden would go on to win 10-plus games the next seven out of nine seasons. But a series of drug problems, injuries and run-ins with the law would plague Gooden the rest of his career.

Blue was one of top pitchers of all time during the peak of his career and was one of the few lefties who threw with power.

Blue is remembered for his eight years with his first team, the Oakland A’s from 1969-77 where he won three consecutive World Series titles. After being called up from the minors in September 1970, Blue tossed his only no-hitter against the Twins.

His best season came a year later as he started the All-Star game and finished the season with a 24-8 record, led the American League in complete games with 24, eight shutouts and a 1.82 ERA.

He was also the youngest player to win both the Cy Young Award and the American League’s MVP at age 23. Blue will always be among the top pitchers of all time in the Bay Area as he was inducted into its Sports Hall of Fame in 1995.

After starting with the Newark Eagles in the Negro Leagues, Newcombe may probably be best known as the first great Black pitcher.

He was the first Black pitcher to win 20 games in 1951, the first to start a World Series game in his rookie season in 1949, and the first to win the Cy Young and MVP awards in the same season.

Newcombe, along with Robinson, Campanella and the Indians’ Larry Dolby were the first four Black players to make the All-Star team. Newcombe is also one of only two players in history to win the Rookie of the Year, Cy Young and MVP awards in his career.

Besides being one of the top pitchers of all time, Newcombe was also pretty good with the bat. He had a career batting average of .271 (ninth all-time among pitchers).

He has a reputation of being a workhorse with a high number of quality innings pitched, and the Yankees made him the highest paid pitcher in MLB history in 2008 with a seven-year $161 million contract.

There is so much more for Sabathia with Cy Young awards, championships and a no-hitter or two. Sabathia is a little more than 800 strikeouts away from joining the 3,000 Strikeout Club, which will be enough for the Hall of Fame and a place as one of the top pitchers of all time.

Paige was a two-time All-Star and was the first Negro League player inducted into the Hall of Fame. Paige is not only referred to by many as one of the top pitchers of all time, but maybe the greatest ever. True if you count his years in the Negro League. But that’s where it gets a little tricky.

Paige dominated the Negro Leagues with several teams for approximately 18 seasons. He was a five-time Negro League All-Star, and won the Negro League World Series in 1942. But Paige didn’t make it to the majors until he was 42 becoming the oldest rookie ever with the Cleveland Indians in 1948.

Paige was the first Negro League player inducted into the Baseball Hall of Fame and may be one of the greatest “what if” stories in sports. We will never know what Paige would have accomplished if he played in the majors earlier. His presence and influence, however, makes him one of the top pitchers of all time setting the pace for many other great Black pitchers.