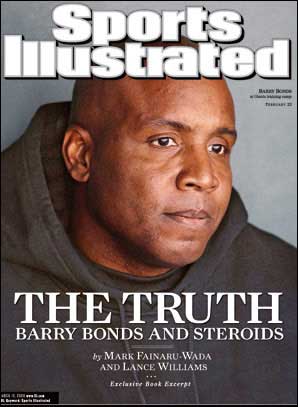 Barry Bonds is the posterchild for the steroid era for many critics.

Steroids in Baseball: Do “We” Care Much?

Baseball’s steroid era has no doubt cast a shadow on the game and its records.

Are the achievements of Roger Clemens and the records set by Barry Bonds legitimate? Now that a stronger testing program is in place, is it a coincidence that scoring is down? How does this period affect who should be elected to the Hall of Fame?

And regardless of how this plays out, how much does it matter to the African American community and has the steroid era accelerated our decreased interest in America’s national pastime?

As Regal reported in 2009, the number of African Americans in baseball had been shrinking for more than 30 years, from a high of 27 percent of major leaguers in 1975 to an all time low of 8.2 percent in 2007. That 8.2 percent figure held steady in 2008 before Major League Baseball saw an uptick for the first time since 1975 in 2009 when African Americans in baseball made up 10.2 percent of major league rosters.

Still, a 65 percent drop is significant, even with the uptick. Many reasons are given for this decline including expensive equipment, the burden of a full-sized field in urban areas, the specialized coaching suburban youngsters are getting can make a big difference in a sport where skills often trump athleticism, and increased international scouting means fewer job openings for American Blacks.

As a result, despite several MLB-sponsored outreach programs aimed at African Americans, there seem to be fewer and fewer Black faces in the stands, other than those selling peanuts, as well as on the field. Does the steroid era have a hand in this situation?

According to UrbanSource Magazine, it probably does not. “In MLB, the athletes have gotten in trouble for steroids after their careers are over, after they’ve broken all of the records and in baseball, records are hallowed.

“When Mark McGwire broke the home run record, it was an American celebration. When it turned out that he did so while taking steroids, it was like he burned the American flag while urinating on George Washington’s grave and punching babies in the face. But the fact is we as an African American community don’t care about these age-old records because we weren’t included in the sports when these records were first established.”

UrbanSource also points out that many of baseball’s hallowed records and its most storied players were established before we were allowed to participate in the game.

Babe Ruth set all his records playing against a bunch of American rural White guys. And while there is little doubt that Ruth could play today, there is no way he would have a similar impact against more diverse and scientifically-selected competition.

Bottom line, the legend of Babe Ruth and the early 20th century establishment of baseball as the national pastime does not resonate with us the way it does with White Americans, and it never will.

You see, the baseball steroid era is largely about the history of the game, and we have every reason not to care about that, not only because we didn’t participate but because it’s largely bogus.

As African Americans, we are probably less inclined to expect a level playing field. If some pitcher is torched by a steroid addled hitter, well welcome to the club. We see and feel intolerance and injustice bigger than that every day.

So a few ballplayers probably cheated on their way to setting hallowed records from baseball’s storied past…big deal. We weren’t a part of that past and once we were let in we lapped the field.

Sure, we can enjoy a ballgame in the summer sun from time to time while munching on a hot dog and sipping a cold beverage. We just don’t care so much if the entertainers on the field are juiced to the gills.