Selig Should Be Honored For Commitment to Diversity in Sports 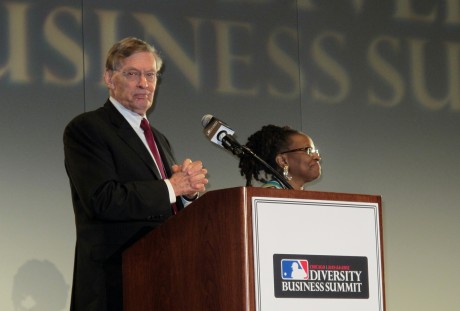 When one conjures up images of diversity in sports, Major League Baseball (MLB) usually does not come to mind.

After all, the majority of the athletes in the NFL and NBA are African American, and the NBA was instrumental in bringing professional women’s basketball to Americans.

Nevertheless, an unsung hero for diversity in sports is MLB Commissioner Bud Selig, who is often maligned in the press for scandals involving performance enhancing drugs, and many times ignored for his effort to bring more African Americans and women into front office positions within America’s past time.

Rachel Robinson, the widow of Jackie Robinson, believes Selig is not honored enough for his commitment to diversity and quality.

On Wednesday and Thursday, MLB and the Houston Astros hosted the second annual business diversity summit, in which companies and individuals could obtain contracts and/or employment with MLB and its 30 clubs.

Selig became acting commissioner in 1992 in the midst of the Marge Schott (former owner of Cincinnati Reds) scandal, where she infamously referred to her Black players as her “million dollar niggers.”  The commissioner created a task force to improve diversity in the wake of that scandal.

When he became the official commissioner in 1998, 13 percent of MLB office positions were held by people of color and 18 percent by women.

However by 2013, 36 percent of MLB office positions were held by people of color and 31 percent by women.

Selig’s employees say that his legacy will be that the baseball front office looks like America in all of its variety.

Furthermore, in a game that produced African American sports heroes like Robinson, Willie Mays and Hank Aaron, Selig is determined to increase Black participation with the Urban Youth Academies and the Reviving Baseball in Inner-cities (RBI) program.

The commissioner also founded a diversity taskforce in April to improve the talent pipeline in baseball, particularly for African American players.

The RBI program currently has 210,000 participants.

To date, 60 alumnus of the Urban Youth Academy and RBI program have been selected in the MLB Draft.

Furthermore, 13 African American players were selected in the first round of the draft in 2012 and 2013.

The Astros and new owner Jim Crane has taken Selig’s dedication to diversity in sports a step farther with the annual Urban Invitational, which gives baseball teams from Historically Black Colleges and Universities like Prairie View A&M University and Texas Southern University a chance to showcase their talent to a national audience.

When Robinson began the movement for diversity in sports by breaking the color barrier in baseball, Brooklyn Dodgers general manager and president Branch Rickey wanted a player with the courage to not fight back against racism in bigotry.

Although no one can stand in the same shoes of an icon like Robinson in regards to diversity in sports, Selig has had the courage to continue the fight and not allow MLB to rest on its laurels.

Robinson once said, “A life is not important except in the impact it has on other lives.”

Fortunately for MLB, Selig has made an impact on the lives of many people of color from children with a dream to adults holding on to their dream.

So, for allowing the opportunity for dreams to come true, Regal Magazine salutes Commissioner Bud Selig.