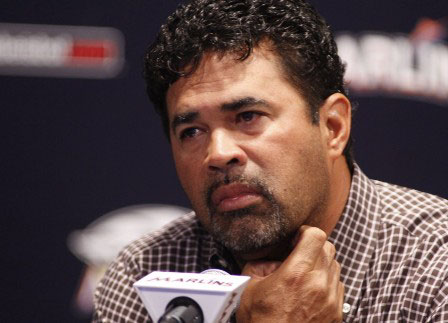 So the manager of the Miami Marlins, the city with the largest Cuban American population in the United States, says he “loves” Fidel Castro and “admires” his ability to stay in power for 60 years.

This is akin to a coach or manager in New York, with its large Jewish population, saying that Adolf Hitler sure was a heck of an orator and certainly helped the German people recover their self esteem in the wake of that oppressive Treaty of Versailles.

No doubt that one of the reasons that the Marlins hired Ozzie Guillen to manage the team was because of his history of colorful repartee with the media that would likely create a lot of attention for a revitalized team moving into a new ballpark.

They did not count on a media firestorm, a five game suspension, calls for Guillen’s job, and a possible series of demonstrations when the team returns home this weekend that will take the luster off a new stadium barely a week into its first season.

Guillen and the Marlins are now in full damage control mode. A press conference was held where Guillen, a Venezuelan, admitted his insensitivity in English and Spanish to the nation in general and South Floridians in particular.

No doubt this debacle has heightened Guillen’s racial sensitivity and perhaps will help him think before he speaks to the media…which also means that if Guillen ultimately keeps his job one of the primary attributes the Marlins thought they were getting will be blunted.

So far, Guillen has escaped the axe. In that way he was much more fortunate than Al Campanis, Jimmy “The Greek” Snyder and Rush Limbaugh, all of whom lost jobs by promoting racial insensitivity with their comments promoting African American stereotypes.

The Campanis incident has been in the news lately with the 25th anniversary of the April 1987 appearance on ABC’s “Nightline” that cost him his position as Vice President and General Manager of the Los Angeles Dodgers.

In that segment he responded to questioning by host Ted Koppel regarding the lack of Blacks in leadership positions in baseball by stating that African Americans lacked the “necessities” required to be managers or general managers of Major League teams. He compared that lack of necessities to African Americans not having the buoyancy to swim particularly well.

Ironically, Campanis was selected to appear on “Nightline” as part of a tribute to Jackie Robinson on the 40th anniversary of his first Major League game because as a minor league teammate the year before in Montreal, Campanis had been particularly welcoming to Robinson and was instrumental in helping Robinson learn the nuances of playing second base after a career in the Negro Leagues as a shortstop.

Despite those credentials, the Dodgers accepted Campanis’ “resignation” two days after his appearance on “Nightline” and released a statement saying that the statements Campanis made could not be further from the ideals and position of the organization.

Snyder was a halftime analyst on 1970s NFL games for CBS, primarily discussing point spreads and gambling, when he opined that it was the particular musculature of African Americans that was responsible for their success in pro sports as opposed to something like, say, hard work. He also described a historical training regimen of hunting with spears and avoiding slave traders as the foundation of African American physiques. His career on CBS ended that week.

Limbaugh’s gaffe was more recent. The arch conservative radio titan was hired by ESPN to analyze NFL games despite a sports background that consisted solely of a brief stint in the promotions department of the Kansas City Royals in the early 1980s.

In 2003, Limbaugh proclaimed that Donovan McNabb benefited from NFL media coverage that wanted a Black quarterback to succeed and therefore exaggerated his accomplishments and gave him too much credit for his team’s success.

This was despite the fact that any reasonable statistical assessment of McNabb’s performance would have put him near the top in comparison with other NFL quarterbacks of that era. That piece of analysis was Limbaugh’s last for ESPN.

This is not a comprehensive list of public figures displaying a lack of racial sensitivity. It is, however, interesting to note that sports, the one true American meritocracy at least in terms of players, seems to lend itself most to these sorts of comments. Perhaps it is because it is still the area where minorities in the United States have the greatest visibility.