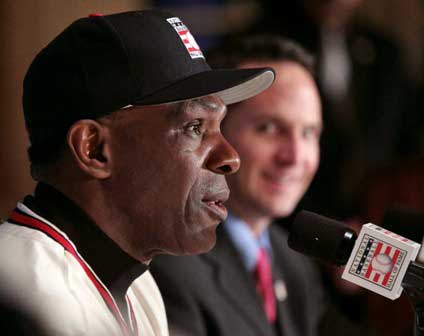 Andre Dawson’s rare combination of power and speed was recognized with Hall of Fame enshrinement by the Baseball Writers Association of America this past January when he was the only player to be named on more than 75 percent of ballots.

Willie Mays and Barry Bonds join Dawson as the only players in baseball history with both 400 homeruns and 300 stolen bases. Dawson is also the only player from a last place team to be voted National League Most Valuable Player, an award he won in 1987 as a member of the Chicago Cubs. He played in an era before steroids inflated power numbers, making his 438 homers even more impressive.

Despite these accomplishments, Dawson appeared on the Hall of Fame ballot nine times before receiving the requisite 75 percent. He said at his post-election press conference that the wait was worth it.

“If you’re a Hall of Famer, you’ll eventually get in,” he said. “I can’t really describe the elation me and my family experienced when I got that call. And regardless, I have just been patient over the years. And one thing my mom always said that it’s going to happen one day. It’s inevitable. Just be ready when it happens.”

On the morning of his election Dawson visited his mother Mattie, who passed away in 2006, at her gravesite. He told the Miami Herald that he had a premonition that this time he would get in and he wanted to thank her for all she had done for him. “I couldn’t hold the tears back before I even got out of the vehicle,” he said. “I told her, `I hope I’ve made you proud and that you’re looking down with a smile on your face.’ I’m boo-hoo crying at that point.”

Dawson joins Gary Carter as the only players who have earned Hall of Fame enshrinement as members of the Montreal Expos. They are likely to be the last, as the Expos franchise was moved to Washington, D.C. in 2005 and now plays as the Washington Nationals.

Both Dawson and Carter had their most noteworthy seasons after they left Montreal (Dawson with the Cubs and Carter with the Mets), but the fact that both players played the majority of their careers with the Expos led the Hall of Fame to place Expo caps on their Cooperstown Plaques. The Baseball Hall of Fame says it considers the wishes of an inductee but that the choice of the logo on each plaque must be emblematic of where the player made his greatest impact.

“The Hall clearly stated their major concern is the history of the game, and that’s what really played into their decision,” Dawson told ESPN about his Hall of Fame enshrinement. “I’m disappointed. I can probably say that, because Chicago was my preference.”  Some have speculated that his Hall of Fame enshrinement as an Expo may not provide the marketing opportunities that a Cub affiliation would have allowed him.

Dawson earned Rookie of the Year Honors with Montreal in 1977 and hit 225 of his homeruns with them in ten seasons. He received his MVP award with the Cubs and hit 174 homeruns over six seasons.

A Miami native, Dawson finished his career with the Florida Marlins and currently works for that club as a special advisor to ownership. He says he plans to do something special to acknowledge his years with the Cubs during his Hall of Fame enshrinement speech.