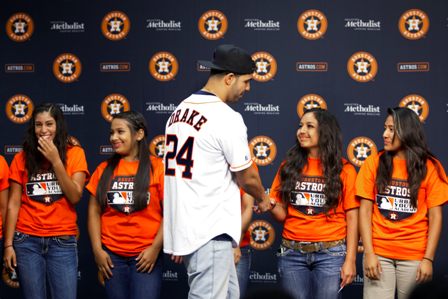 Started From the Bottom, Now He’s Back

Rap star Drake started from the bottom when his music career began in Houston.  But thanks to hip-hop moguls like Jas Prince and Lil Wayne he made it to the top.

Thursday he came back to the city that birthed his career to kick off his first annual Houston Appreciation Weekend with a celebration at the Astros vs. Diamondbacks game at Minute Maid Park.

“Houston is really important to me,” said Drake.  “I have it tattooed on my skin and heart.”

And in partnership with the Houston Astros, the rap star and actor showed that their hearts are with community service projects as well.

The Toronto native is using Houston Appreciation Weekend as a way of giving back to the community that has given him so much.

Along with Astros players like George Springer, the rapper hosted 50 kids from the team’s Urban Youth Academy yesterday.

Adorned in a customized Astros jersey, Drake interacted with his fans (signing autographs) in his own special section while fans jammed to many of his hit songs between batters and innings.

The Astros who are one of the hottest teams in Major League Baseball outlasted the Arizona Diamondbacks 5-4 in extra innings (10) after a walk-off homerun by Chris Carter.