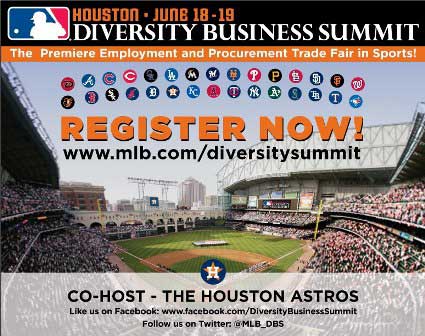 Sports have played a huge role within African American communities for as long as many can remember.

It provided kids with something to do to keep them out of trouble and active, a way for people to bond and even inspiration for many as to what they wanted to aspire to be.

The number of African Americans in sports like basketball or football are abundant and everywhere on our television screens. One sport that the representation of African Americans is scarce is on the baseball diamond, and Major League Baseball (MLB) has created a task force to help develop more diversity in baseball through its second Diversity Business Summit.

Recently, the number of African American players in professional baseball has been at its lowest since the beginning stages of integrating the sport.

According to a USA Today report, Blacks made up only 7.7 percent of Opening Day (25-man) rosters. This is the lowest percent since 1959.

MLB along with the Houston Astros have come together to increase diversity in baseball and within the organization by co-hosting the second MLB Diversity Business Summit.

“Diversity is essential to our sport and remains a core priority of Major League Baseball,” said Baseball Commissioner Bud Selig. “Major League and Minor League rosters reflect players of many different backgrounds throughout our game. Away from the field, the MLB Diversity Business Summit is a key platform, allowing us to offer unprecedented networking access to talented individuals who are interested in baseball careers and business opportunities.”

On June 19 at the George R. Brown Convention Center in Houston, the summit will provide attendees with job opportunities and access to all 30 MLB Clubs, MLB Network, MLB Advanced Media, Minor League Baseball Clubs and MLB’s Central Office. An opportunity the league says is a rare one.

“You cannot continue to move forward and be productive in this universe without having a rich diverse cultural organization,” said Wendy Lewis, Senior Vice President of Diversity and Strategic Alliances with Major League Baseball.  “We think it’s going to continue and enhance our game.”

“The growth of minority representation in terms of business over time has never been better,” said Lewis. “I think we do have a good representation that we expect to continue to grow.”

Commitment from all 30 clubs within the organization shows just how dedicated MLB is to creating diversity in baseball. Bringing all of their clubs together in one location at one time for the Diversity Business Summit is something that isn’t done in many professional sports.

“It’s a great example of how dedicated we are in leading this kind of initiative in all major league sports,” said Lewis. “They are committed with really reaching out to a very diverse public.”

Management positions will also not be out of reach for minorities. However, chances for actually landing a general manger title are very small. There are only 30 major league clubs, which only means 30 general manager positions.

“The reality is that it’s not a position that turns over quickly,” said Lewis. “I think that it’s important that folks realize relatively what a real commitment and a long-time career path being a general manager requires.”

While the window of opportunity for those management positions is limited, there will be numerous other jobs and business opportunities that will be available during the summit. But one job title that many would love to see held by an African American is as a majority team owner. It’s something the league says could certainly happen.

“The next time a franchise is available that can happen, that cannot happen,” Lewis told Regal Magazine. “It’s not a matter of mandating that happens and mandating that it doesn’t happen.”

Magic Johnson is considered to be top of the line for becoming a majority owner after a recent appointment as one of the minority owners with the Dodgers’ group. However, there were a number of ownership proposals for the Dodgers.