Detroit Tigers Will be Popping Bottles After 2012 MLB Playoffs 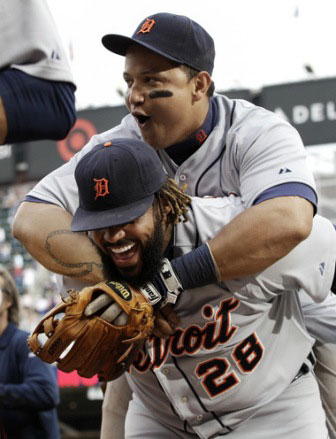 Expect to see Triple Crown winner Miguel Cabrera, Prince Fielder and the rest of the Detroit Tigers to be the last team standing in the 2012 MLB playoffs (Photo courtesy of MLive.com).

It’s a mix of the traditional, the new, the expected and the surprising as the 2012 MLB playoffs begin tomorrow with the first-ever Wild Card Play-In games.

Beginning this year, baseball provided for a second wild card team in each league to participate in the 2012 MLB playoffs.

The two non-division champions in each league play each other for the right to enter the best of five Division Series.

These historic games take place today. At 5:07 p.m. EDT the St. Louis Cardinals will go to Atlanta to take on the Braves in the National League play-in, and about three hours later the Baltimore Orioles will visit Rangers Ballpark in Arlington, Texas to battle the defending American League Champion Texas Rangers.

The fact that the Rangers are relegated to the play-in game is one of the big surprises this season as the Oakland A’s became the first team in baseball history to trail by five games with nine games to play and win a division championship.

Regal is picking the Braves and the Rangers to advance to the Division Series.

Atlanta has Kris Medlen on the mound, and the Braves have won the last 22 games started by Medlen, who is 10-1 on the season.

Texas has ace Yu Darvish on the mound while the Orioles are forced to counter with fifth starter Joe Saunders.

In the Division Series, baseball’s traditional kings, the 27-time World Series champion New York Yankees will face the winner of the Wild Card game starting Sunday. Given the long rest, the Yankees will be able to start ace pitcher C.C. Sabathia twice, giving the Bronx Bombers an edge that the Rangers and Orioles will not be able to overcome.

The other American League Division Series matchup features the surprising A’s against the Central Division champion Detroit Tigers, who overcame the Chicago White Sox in the season’s last week after being picked by nearly everyone to easily win the division.

Regal likes the Tigers, who had the luxury of setting their rotation to maximize the appearances of 2011 Cy Young Award Winner and MVP Justin Verlander, to turn out the lights on an Oakland team which started five rookie pitchers down the stretch.

Over in the National League the top seeded Washington Nationals will play the Wild Card winner. Regal is concerned about the Nats’ tepid play down the stretch and the benching of phenom starting pitcher Stephen Strasburg, and therefore picks the Braves or Cards to upset Washington.

The other NL Division Series matchup features the Cincinnati Reds and the San Francisco Giants.

The Giants are led by presumptive MVP candidate Buster Posey and pitcher Matt Cain who started the All Star Game for the National League after tossing a perfect game. The Reds depend on a lineup that led the NL in on base percentage, a deep bullpen and Cy Young Award contender Johnny Cueto.

Regal believes the Reds will capitalize on weaknesses at the back of the Giants rotation to take this series in five tough games.

Regal thinks Detroit will rise to the occasion and avenge last year’s championship series loss to the Yankees and likes the Reds to top the Braves in the NLCS.

As for the World Series, we expect a parade in Motown after the Tigers dispatch the Reds in seven riveting games with the finale played in freezing conditions on the banks of the Ohio River in the “Queen City.”

If there is one fundamental truth about baseball, especially in an era of advanced metrics, deep management teams, and detailed scouting, it is that any team playing in the 2012 MLB playoffs is capable of winning.

So buckle up baseball fans for the most exciting month on the diamond.