Baseball in Africa Gets Momentum Boost From Uganda 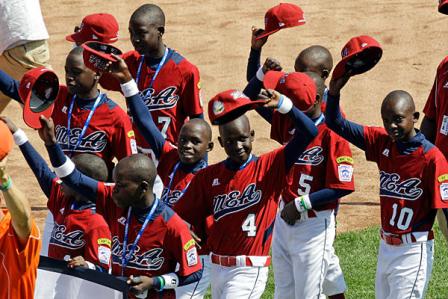 Baseball in Africa will hopefully become popular because of the Ugandan Little Leaguers (Photo courtesy of bantudaily.com)

For the first time in the history of the Little League World Series, a team from Africa represented the Middle East-Africa group at the two-week tournament in Williamsport, Pa.

Unfortunately, Uganda did not compete well in the tournament, losing 9-3 to a team from Panama before getting crushed by a powerful Mexican team 12-0 on Aug. 18 in a game that lasted just four innings due to the Little League rule which calls games at four innings if the run differential is 10 or greater.  Uganda, however, did win a consolation game 3-2 over Gresham, Ore. on Tuesday.

But the competition was just a small part of the Ugandan Little Leaguers’ experience. Many of these youngsters aged 11-13 live in third world villages and some in orphanages.

According to ESPN, the team was accustomed to playing without shoes so the free cleats that came with entry in the tournament were an adjustment that dominated the first practice in Williamsport.

Family members could not afford to make the 12,000 mile trip, so local Pennsylvania residents adopted the team and rooted for it in games.

The official gift shop sold out of the red Middle East-Africa fan ware, and local churches organized clothing drives for the players’ community.

The team would also embark on a goodwill tour of sorts after the Little League World Series that included a game in Trenton, N.J. Trenton is the home of an American who is serving as one of Uganda’s assistant coaches.

The boys and their coaches are also scheduled to visit the U.N. building in Manhattan, N.Y. before heading home.

One important question is how will this experience and the attendant notoriety impact baseball in Africa?

Africa was the last of the six major continents to develop baseball and is the only one (as of 2010) not to have produced a major league player.

South Africa has been the continent’s top baseball country, sending its national team to the 1974 Amateur World Series and many events since (most notably the 2000 Olympics and the first two World Baseball Classics). South Africa’s fate in those two tournaments was similar to Uganda’s in Williamsport.

With South Africa and Uganda as evidence, baseball in Africa is a growing sport with lots of potential, though many of the practicing nations are still at a developmental stage; the game of baseball has certainly won the heart of many African players and fans alike.

This love for baseball in Africa was further strengthened by missionaries and military attaches from America who began organizing recreational games with the local communities over the weekends.

Despite the embrace of baseball by African natives, there has always been a power struggle between associations and federation members over leadership which has affected the growth and development of baseball in Africa.

The only way for baseball in Africa to develop is for the federations to work together to build programs and bring in experts from the U.S., Asia, and Latin America where the game is very strong.

Perhaps if the adults adopted the attitude on display by the Ugandan Little League team, baseball in Africa can become a power in world tournaments within a generation.