Astros OF L.J. Hoes on Increasing Black Interest in Baseball 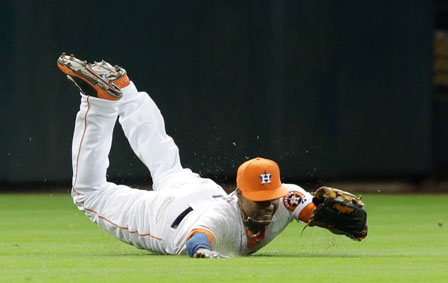 Houston Astros left fielder L.J. Hoes makes a diving catch for the out on Detroit Tiger Ian Kinsler to end the top of the 7th inning with the bases loaded on June 28 (Photo Credit: AP Photo/Pat Sullivan).

There once existed a time that the sport of choice for African Americans took place on a baseball diamond.

Churches had leagues and one would be hard-pressed to pass an empty sandlot in the African American community and not see a game of some sort happening.

Our sports heroes at that time included legends like Josh Gibson, Satchel Paige and “Cool Papa” Bell, but recently African American children have begun to look elsewhere to find their sports heroes.

However, the Houston Astros are making waves throughout the African American community because of the plethora of young Black talent on the team, and outfielder L.J. Hoes hopes their success will lead to a renewed interest in the game for our children.

RegalMag.com spoke with Hoes on July 12, before the Astros took on the Boston Red Sox, to get his opinion on the state of baseball in the African American community.

RM:  The Astros have a lot of young (African American) talent.  What has been the response from the community as far as the success of the young, African American talent?

L.J.:  They’re really behind us. A lot of us have played together coming up.  (Jon) Singleton and (George) Springer and I are very, very good friends.  This is something we’ve dreamed about, making an impact on this community.  It’s a diverse community down here and they’re looking for some young, up-and-coming talent and we’re gonna provide that.

RM: What type of response have you all gotten from the kids?  I know you have the Urban Youth Academy on the north side (of Houston).  When they see people who look like them, what has been their response?  Are they getting more interested in baseball?

L.J.: Yeah, definitely.  We have the Urban Youth Academy. We talk to some of the young African American kids that work in this clubhouse and [they] are baseball players.  It kind of gives them the hope and inspiration to see that, especially me and Singleton coming from the inner city, that somebody from the inner city can make it out of the inner city. We stress to those kids, just stay in school, and work hard and stay focused and don’t let anyone tell you, you can’t make it here because we’ve done it.

RM:  Back in the day baseball was THE sport in ANY community.  What type of role has the media played in maybe the declining popularity in the inner city?

L.J.: I really think it’s not even the media. I just think it’s basketball and football are more attractive.  It’s a lot easier.  Baseball now has become such an expensive sport.  You have to pay $300 to buy a baseball bat.  You have to pay $200 to buy a glove.  You know, you have to pay $100 for shoes.  A lot of kids in the inner city don’t have the means to pay for that stuff.  It’s easy to go to the store and buy a pair of shoes and get a $5 basketball and go outside and shoot basketball all day.  I think it’s more having to do with the community getting involved and giving back to these community centers and the RBI Youth Programs.  I think those type of things are going to help get African Americans back into the game.

RM: (In) hockey, the Atlanta Thrashers had a lot of African American talent a few years back.  They had declining attendance so they marketed their Black players to a predominately Black city.  Do you think the Astros are doing enough to let people know that they have a lot of Black talent, such as by advertising in the Black press?

L.J.: I think it’s gonna come over time.  I think right now, you have such a big star in Jose Altuve you can’t really take anything away from him.  He’s been a true impact to this city and a true leader to this city.  So I think with Springer and Singleton and hopefully myself being here, we’re gonna go out and play hard and these kids can look and see, and I’m sure sooner or later you’re gonna see George Springer stuff around the city of Houston. And you’re gonna see Singleton stuff around the city of Houston.

L.J.: Historically, look at the stars and the guys that played, the Willie Mayses and the Barry Bondses, those guys who were, you know, among the greatest of all time.  Now you have guys like Adam Jones, you got the Andrew McCutchens, you got the Dee Gordons, you got guys like that that are African American, who are All-Stars, who are faces of a franchise.  I think if those kids see that there’s a lot of money to be made in this sport.  There’s a lot of popularity to this sport.  Not just in the African American community, just in America. Take advantage.  You got Matt Kemp out there who’s making close to $200 million.  It’s a lot of opportunity, a lot of promise in this game.  I think if those kids see it and see how hard we worked to get to this position I think that it will fall in line.