Twins OF Delmon Young Finds Success On, Off Field 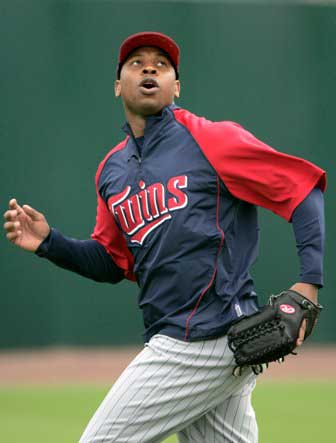 Young has proven himself on and off the field for the Twins (Steven Senne/AP).

Delmon Young Realizes Potential with the Twins and in the Community

Until this season Delmon Young was best known for throwing a bat at an umpire during a minor league game that led to a 50 game suspension in 2005. He was also considered to be a mild disappointment on the field and had been traded away from the team that made him the first pick in the nation in 2003.

That has all turned around. Today, Delmon Young is one of the main reasons that the Minnesota Twins enter the playoffs as American League Central Division Champions and has become a leader in giving back to the community for a cause that is close to his heart.

The bat throwing incident occurred in an International League game between the Pawtucket Red Sox and Young’s Durham Bulls, the AAA affiliate of the Tampa Bay Devil Rays. After a called third strike, Young took his time leaving the batter’s box and the umpire tossed him. Young then flipped his bat underhand and it sailed end over end, striking the umpire. The umpire, whose name was not released, did not appear injured and remained in the game.

“I sincerely regret my actions,” Young said in a statement released by the office of his agent at the time of the incident. “Regrettably, in the heat of the competition my emotions got the better of me.

“My behavior was completely unacceptable. I want everyone to know that I recognize that it is never right to throw a bat and I certainly never intended for the bat to make contact with the umpire. Nevertheless, I owe an apology to my team, the fans and most importantly to the umpire, for the incident. I am sorry.”

Young and the Devil Rays were able to move past the incident, and Young played in all 162 games for the major league team in 2007. He hit .288, but his defense and power were disappointing. Young also rarely walked, and his on-base percentage was .318, well below major league average.

Fearing that Young’s value would soon drop, Tampa Bay traded him to Minnesota for pitcher Matt Garza and shortstop Jason Bartlett. The trade could not have worked out better for the Rays, as Garza and Bartlett were significant contributors to Tampa’s World Series run in 2008 while Young continued to be seen as a moderately productive, yet disappointing player for the Twins.

During this time, Young’s mother Bonnie was suffering from pancreatic cancer. She had connected with the Lazarex Cancer Foundation of Danville, Calif. and was going to the Philippines for an FDA-approved clinical trial of the drug Rexin-G. The mission of Lazarex is to provide more options for cancer patients and provide financial assistance to those who can’t afford treatment.

“In a clinical trial, the drug sponsor actually pays for the medicine itself, so they’re not charging for the medicine,” Lazarex President Dana Dornsife said, “but it’s all of the diagnostics and the travel and the doctors’ fees and all of the extra things that go along with it—that specifically are not covered by insurance—that prevent people from being able to take advantage of cutting-edge technology.”

Despite the trial and the help of Lazarex, Bonnie Young passed away on May 18, 2009. Soon after Bonnie’s death, Delmon helped raise $32,000 with help from his Minnesota Twins teammates. Delmon, his brother Dmitri and his father Larry presented the check to Lazarex in June before a game between the Twins and host Oakland Athletics.

“Everybody reacts to their own personal situations in their own way, but there are people who just decide that they want to make a difference and they know they can make a difference,” Dornsife said. Delmon Young also helped Lazarex raise an additional $5,500 by participating last January in a youth baseball clinic in his hometown of Camarillo, Calif. A similar clinic is planned for Camarillo youth baseball players again this winter.

Delmon Young has come a long way from his days as a bat throwing minor leaguer. Perhaps a month from now he will be measured for a World Series ring, commemorating not just a championship for the Twins, but a memorable year for himself and his family.