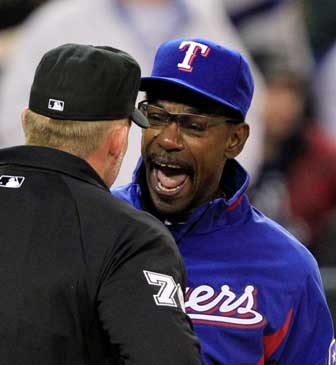 Ron Washington’s reputation inside baseball was impeccable. As a long-time coach with the Oakland A’s he was instrumental in helping Eric Chavez win six consecutive Gold Glove Awards, to the point where Chavez gave Washington one of the trophies.

After Washington’s house in New Orleans was destroyed by Hurricane Katrina, various baseball players came together to collect money to help him rebuild and repair. Former A’s player Jason Giambi handed Washington a personal check for $20,000 when the Yankees visited Oakland the next season.

That reputation was rewarded before the 2007 season when Washington was appointed manager of the Texas Rangers. At that point it seemed his ten seasons as a marginal major league player and his decade as a coach had paid off with Washington entering the high salaried world of major league skippers.

Ron Washington sparked almost immediate improvement in the franchise that had not been to the playoffs since 1999 and had been a perennial doormat to the A’s and to the Angels. After a season finishing fourth with inherited players, Washington guided the Rangers to second place finishes in 2008 and 2009 before winning the division this season and drawing the 2008 American League Champion Tampa Bay Rays as their opponent in the Division Series.

The fourth place finish in his first year had some observers place Ron Washington on the hot seat, but he survived and eventually thrived until an off-field incident nearly derailed his managing career. At 57 (an age at which one should probably know better), during the 2009 season, the Rangers manager tested positive for cocaine.

“I did make a mistake and I regret that I did it,” Washington told SI.com. “I am really embarrassed and I am really sorry.” By all accounts, Washington alerted the Rangers and Major League Baseball that he might fail the test before the results were in. He repeatedly claimed that the positive test followed his first and only use of cocaine.

The Rangers were alarmed at Washington’s admission, but ultimately decided not to fire him if he followed the necessary steps and didn’t slip up again. “Despite the disappointment, we felt that supporting Ron was the right thing to do,” Texas general manager Jon Daniels told SI.com. “We asked a lot of questions and worked through Major League Baseball’s program, where Ron had appropriate consultation, support and testing. But for all the reasons we hired him in the first place, we felt and continued to feel that he’s the right guy to lead the club. He made a significant mistake. He also admitted to it and took steps to ensure that it won’t happen again.”

This week Washington and the Rangers take on the formidable Rays, and if they get past Tampa Bay the winner of the Yankees-Twins series will await.  The Rangers won game one of the series against the Rays 5-1. And then, if fortune is really smiling, the World Series. But no matter how the month of October plays out, Washington believes he has already won a bigger fight.

“I’m at peace,” Washington said to Yahoo! Sports last month. ”No matter what happens from this point on, I’m at peace. I hope I’m able to have a place in the game of baseball until my brains don’t work anymore or I can’t function. I’m a lifer. This is what I have a great passion for and I will always have a passion for it. I don’t think I could survive without it.” Everyone at Regal hopes that the frequent testing now demanded by Major League Baseball will help Ron Washington keep his nose clean.