Curtis Granderson and His MVP-Caliber Season 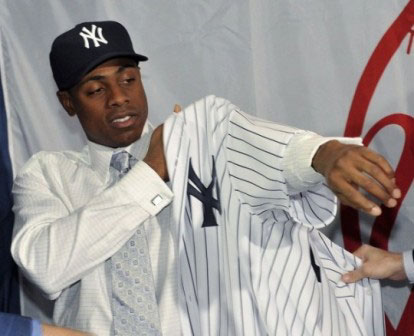 Curtis Granderson is a leading candidate for the American League MVP award.

As usual, the Yankees are loaded with big name players in their starting lineup. Derek Jeter and Alex Rodriguez are headed for the Hall of Fame, Mark Teixeira has been an All Star several times, Robinson Cano is the reigning Homerun Derby champion, and Jorge Posada has been a fixture in the Bronx since 1995.

This year, though, their most productive offensive player has been centerfielder Curtis Granderson. He was acquired by the Yankees from Detroit in 2009 with a reputation as a productive player whose performance suffered greatly against left-handed pitchers. Curtis Granderson began his Yankee career in 2010 at the bottom of the order with muted expectations.

At first he lived up to that billing. He hit just .240 in the first half of last season with only seven homeruns. Against lefties his batting averaged suffered by 20 points and his slugging percentage was down about 200 points. He improved in the second half, and delivered about what was expected; occasional power, reaching base at a league-average rate, and covered centerfield adequately. Moving from Comerica Park to Yankee Stadium cost him some triples, so he was no longer a league leader in that category, but his overall slugging percentage improved slightly.

This year has been an entirely different story since a two-day seminar with Yankee hitting coach Kevin Long in August 2010 that closed his stance, added a two-handed finish and moved his hands back has turned Curtis Granderson into an All Star starter and an MVP candidate.

Through mid September he has scored and driven in more runs than any American League player and is among the league leaders in triples with 10 and homeruns with 39. He has come to bat more often this season than any other Yankee, and he is clearly the player igniting their offense. This performance has made him, along with the Tigers’ Justin Verlander and Boston’s Jacoby Ellsbury, one of the leading candidates for the American League Most Valuable Player Award.

“He’s been MVP-like,” Yankee General Manager Brian Cashman said to the New York Daily News. “When we made the deal, I didn’t make any representations to ownership that we were going to be getting an MVP. What we acquired was a player we felt with above average power, defense and running; a guy that would steal bases and give us power from the left side. He’s been exceptional.”

“He’s been outstanding,” said Yankee pitcher Phil Hughes in the New York Post. “When he’s on the field, he’s been unbelievable and then there’s what he means to this clubhouse. He’s a super positive guy, always full of energy and real positive. He’s been our spark. Every time we need a big hit, a home run, it seems like he’s the guy hitting it. Every year it seems like someone steps up and has that sort of year. Robbie [Cano] did it last year and Grandy this year has been unbelievable.”

If anything holds Curtis Granderson back with MVP voters it will be that he has delivered below-average play in centerfield this year. According to baseball-reference.com, his defense has actually cost the Yankees about four runs this season.  Working in his favor is that the Yankees are the winners of the American League East, which hurts Ellsbury, and that Verlander loses points in some voters’ minds for being a pitcher who can be honored with the Cy Young Award.

Whether or not Curtis Granderson is crowned AL MVP, he will rightly be in the crosshairs of the Yankees’ postseason opponents as the Bronx Bombers compete for their 28th World Series title.