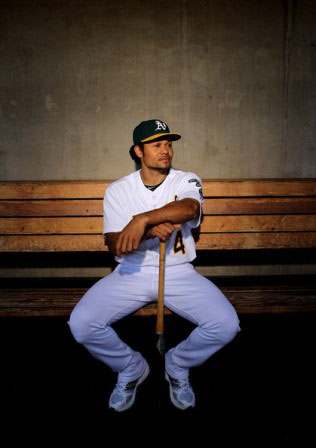 Eight-year veteran and 2007 World Series champion Covelli “Coco” Crisp is a veteran presence on and off the field for a young Oakland A’s team looking to overtake the Texas Rangers in the American League West.

Coco Crisp brings the A’s strong defense in centerfield, great speed (32 stolen bases last year), and sets an example for how to act off the field through his Reading Across American foundation that he began this year. 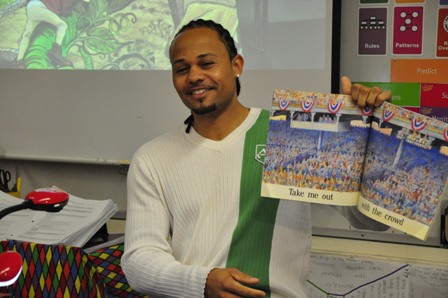 “I go into classrooms and tell kids I understand what it is like to be shy, to not want to get up in front of the group and read your work, because that was me,” he told Regal Magazine. “I tell them that trying is good and failing is OK, because the more you try the better you get.”

Coco Crisp says he was a good student growing up, but was reluctant to speak in class and share his work. “I wanted to step outside baseball and get into education because education is important.”

Education was important enough to Coco Crisp that he graduated from high school at 16. After high school he went to Southern University where by his own admission he got on the wrong path and had to transfer to Pierce Community College in Los Angeles because of poor grades. His baseball ability bailed him out when the St. Louis Cardinals made him their seventh round draft choice in 1999 when Crisp was 19.

After starting slowly in his first two minor league seasons, Crisp caught fire in 2001 and 2002 hitting over .300 those two seasons in Single A and Double A. The Cleveland Indians acquired Coco Crisp in 2002 and brought him to the big leagues by the end of that season. He was up to stay in 2004, was earning over $2 million by 2006 and after being traded to the Boston Red Sox was a World Series Champion in 2007.

As is the custom, Coco Crisp was awarded a large, gaudy diamond ring by the Red Sox for that 2007 championship. Crisp chuckled when he was asked if he wears the ring around the A’s clubhouse to motivate his teammates who haven’t won.

“I might rock the ring when I go to events to show the world I’m proud of winning the World Series and proud of wearing the Red Sox logo. Wearing it around the clubhouse isn’t something I do. What’s important in the clubhouse is how you carry yourself, and I try to carry myself with a winning attitude.”

One of the interesting side stories of the 2007 World Series was Coco Crisp ceding his job as starting centerfielder to Jacoby Ellsbury. As the 2007 season wound down Crisp went cold while Ellsbury got hot. Crisp lost his job to the rookie during the League Championship Series and became a late game defensive replacement as Ellsbury hit .438 in Boston’s World Series sweep of the Colorado Rockies.

Through all that, Coco Crisp was lauded for his good attitude and for helping the younger players adjust to playing high pressure games after just a half season in the majors. “You can’t put yourself above the team,” Crisp said. “I got in a cold streak and everybody knew it. Jacoby is a good player and a good dude. For me to pout or cry would have made me a bad teammate and a bad person. I just tried to continue to enjoy myself and keep the pressure off Jacoby. He did a great job.”

Coco Crisp played one more season in Boston before joining the Kansas City Royals in 2009 and coming to Oakland last year, finishing second to Texas in the A.L. West. The veteran outfielder is bullish on his team’s chances this year.

“We have more vets this year, which makes it nice,” he said. “(Mark) Ellis leads the infield and I have Josh Willingham and David DeJesus with me as vets in the outfield. We have a special group of guys, and the organization did a great job getting some thump to go with our pitching. We could have won last year, but injuries kept our offense from helping the pitching staff. We’re kind of a sleeper team this year built around pitching and defense with (designated hitter Hideki) Matsui, Willingham and DeJesus adding some thump.”

Part of Crisp’s team leadership is his atypical fashion sense. “I put together outfits from thrift stores, Armani, Abercrombie, second-hand stores, mix and match pieces that might cost $300 or $5. I like to be unique. It’s fun.”

His post-career plans are also unique and could be fun. Crisp sports a 225 bowling average and would like to try professional bowling after baseball. If that doesn’t work out, he is also participating in improvisation and other acting classes this spring and is considering that as a line of work once baseball is over. Whatever he does, money should not be a primary concern. According to Baseball-reference.com Crisp has earned more than $23 million in salary since he’s been in the majors.

Oakland fans hope that by the time he retires from baseball he will be sporting an A’s World Championship ring to match the jewelry he won in Boston.