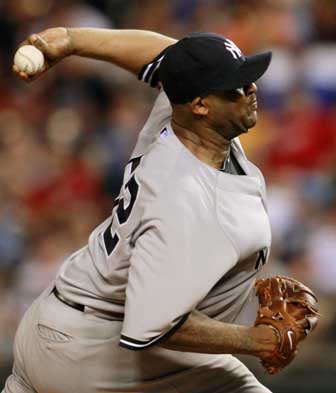 Sabathia will be key throughout the pennant race (Orlin Wagner/AP).

Starting pitching is the foundation for success in any pennant race. And despite sharing the American League East lead with the Tampa Bay Rays, the New York Yankees would be foundering were it not for the big body and strong left arm of C. C. Sabathia.

Yankee starting pitchers have been largely ineffective and injured as the pennant race heated up in the second half of the season. Andy Pettitte and Damaso Marte are on the disabled list, A.J. Burnett’s ERA since the All Star Break has climbed above 6.00, and Phil Hughes has given up 10 runs in his last 15 innings. This has reduced New York to depending on rookies like Ivan Nova and journeymen like Dustin Mosely as the club attempts to win its 28th World Series.

Sabathia’s performance this season has more than justified his $24 million salary for 2010 on his $160 million contract. The 6-7, 290 pound lefty is 18-5 going into September with an ERA of 3.14. He has struck out 160 hitters in 195 innings while surrendering just 177 hits and allowing just 62 walks. He is a leading candidate to take home his second Cy Young Award as the American League’s Most Valuable Pitcher. Sabathia turned in a 5-1 record in August while his rotation mates struggled.

“He has given us just what we’ve needed,” said Yankee Manager Joe Girardi.

Among the many Yankees who could be considered future Hall of Famers, Sabathia and Mariano Rivera are the only ones having their typically excellent seasons. Alex Rodriguez is hitting fewer homeruns than he has in any full season, Derek Jeter is getting on base less often than he has since he became the regular shortstop, Pettitte has been hurt since July, and Mark Teixeira has only recently come around after a very poor first half of the season. Surprisingly good performances by Nick Swisher, Robinson Canoe and Brett Gardner have helped pick up the slack at the plate.

Still, Sabathia has been the stalwart all season. In his last 17 starts the Yankees are 15-2. “I just kind of had to battle,” he told the Newark Star Ledger. “These guys score enough to get the wins.”

So what can Yankee fans expect for the rest of the season? According to baseballprospectus.com, the Yankees are better than a 90 percent bet to make the post season, so the pennant race is likely to have a happy ending. It is probable that either New York or the Tampa Bay Rays will win the American League East with the other winning the Wild Card. Once that happens, Sabathia will be the key.

The Yankees will try to set their rotation so Sabathia can pitch twice in the best of five first round, which makes them a very likely winner. In the American League Championship Series the Yankees will have to win four games, and Sabathia will start just twice in seven possible games. This means the team will depend on a recovery by Pettitte and a return to form from Burnett in order to move on to the World Series. No one in the Bronx is anxious to have Nova or Mosely making anything other than an emergency start in October.

If the Yankees are to win the pennant race and raise championship flag number 28 this fall, they will need yeoman work from their $160 million ace, C. C. Sabathia.